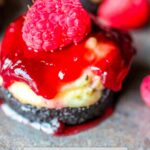 Sweet raspberries turned into Mini Raspberry Cheesecakes make the perfect easy elegant dessert after a deliciously grilled meal (or any other meal)!

Some mornings you wake up early, and your motivation is in full swing. And you make Mini Raspberry Cheesecakes because… dessert!

This happened earlier this week, when in some strange morning induced wake-up fog, I came up with my full meal for dinner that night before I even got out of bed.

And before my coffee had brewed and I’d taken my first sip, I also came up with about a half dozen recipes I wanted to make all at once.

These Mini Raspberry Cheesecakes were first on the list, because I had just bought these mini cheesecake pans and wanted to give them a try.

You can get a set here.

Once I opened it up, it was time to get started. I sprayed the pan generously with non stick spray.

How to Make Mini Raspberry Cheesecakes

Use a food processor to get a really fine powder of crumbs. (see tips & tricks)

Then add a half stick of melted butter until it makes it soft and pliable. A lot like dough. Spoon 2 loose tablespoons into each little cheesecake cup. Don’t pack it before you put it in.

Use your fingers to push the mixture down into the cup shaping, getting it packed in pretty well.

Now it’s time to mix up the next layer. The cheesecake layer.

In a bowl, mix 8 ounces of softened cream cheese with 3 tablespoons of sour cream.

Gently mix in a teaspoon of vanilla.

Crack and add your egg and mix just until incorporated into the mixture.

Last but not least, add in your sugar and cake mix, a little bit at a time just until incorporated. DO NOT OVERMIX. (see Tips & Tricks)

Spoon two tablespoons of cheesecake batter on top of the chocolate crust.

When they are finished, remove from oven and allow them to cool about 5-10 minutes in the pan.

Remove very carefully from the pan and allow to chill in your refrigerator for about two hours or so. (scroll down for more HOW to after they have chilled)

Cheesecake Consistency: You are going for a smooth consistency.  Over mixing incorporates additional air into the cheesecake batter which then tends to cause cracking on the surface of your finished cheesecake and can at times make it fall apart.

Chocolate Graham Crackers – You can use crushed chocolate cookies/wafers too, I just happened to have chocolate graham crackers I wanted to use up.

Finely Chopped Walnuts – You can use pecans or another nut if you prefer. I don’t necessarily recommend that you don’t use nuts at all, because they truly add some fantastic flavor. But if you have a nut allergy, you can skip them. Consistency might be a little different.

Sour Cream – You could potentially swap this out for greek yogurt, but for flavor purposes, I recommend you use a vanilla greek yogurt and then SKIP adding the vanilla extract to the recipe.

White Cake Mix – this is always a strange one for people, but it adds SO much flavor to the cheesecake mixture. We have never made it without the cake mix, so I am unaware of how it would turn out without it, but you could probably substitute any flavor cake mix and have it turn out similar with different flavors.

Raspberry Pie Filling – This is where you could get a little creative, use whatever flavor you have. Obviously they won’t be “mini raspberry cheesecakes” at that point, but they could be any flavor your heart desires!

How to Work with Chilled Cheesecakes

Once they have chilled for a bit, it’s time to get creative.

We made our cheesecakes with raspberry because it’s one of our absolute favorite flavors.

But these would work great with almost any flavor:

A couple of days before this, I had made some Seedless Raspberry Pie Filling using this method for another recipe I was working on. I had just enough leftover, so I spooned some of that on top.

You could use canned pie filling or even jelly or jam. Then I topped each one with a fresh raspberry.

I cannot even tell you how fast these went. I saved three to photograph the following day, but the rest were history.

And those three got gobbled up as soon as the photo shoot ended.

Dainty, tiny and elegant. These are great for a dinner party, or really just because.

Take it one step further and drizzle chocolate sauce over the top! YUM!

Don’t forget to pin the Mini Raspberry Cheesecakes for later!