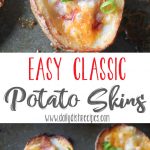 I’m taking some time to update some older recipes. It’s fun to make stuff from the past and enjoy a great recipe and then reshoot for better photos.

These Easy Potato Skins are really simple to make and are great for an appetizer, snack or just because you feel like it.

I make them as a meal sometimes too, but that’s mostly because we love them that much.

The best part of this recipe is the fact that you can add to it and make it your own. It’s a great jumping off recipe.

Make them mexi and fill them with guacamole, make them cheeseburgers and add ground beef, shredded cheese and bacon. There are so many ways to make these your own!

You start by baking the potatoes on a cookie sheet in the oven. While they are baking, I cook the bacon and chop everything up.

We love onions in our potato skins so I chopped those up too, but I didn’t include those in the directions below because lots of people don’t like them.

Once the potatoes are cooked, allow them to cool. Once they are cooled, slice them in half and scoop out some of the inside. Brush them with some olive oil on all sides.

You’ll then pop them back in the oven under the broiler for about 2 minutes. All of this is down in the printable recipe below so I am not being super detailed.

Again, this basic potato skins recipe is so EASY!

Time to fill ’em up with whatever you want. Mostly bacon and shredded cheese but if you want something else, add it in.

It’s time to stick them in the oven and make them bubble. Follow the directions below and you will have tastiest easy potato skins recipe in about 5 more minutes. Pop ’em back in the oven under the broiler and watch them carefully because they will burn fast. You’re looking to melt that cheese and get it nice and bubbly. Pull ’em out, allow them to cool slightly, sprinkle on some green onion and serve them with sour cream! Delish!

A simple snack or appetizer. I often get these ready before the kids get home from school for a fun after school tasty treat. Make these easy potato skins and your kids won’t be hungry again until dinner.

Are you ready to whip up a nice batch of these potato skins? 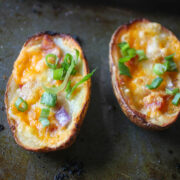 www.dailydishrecipes.com
This Easy Potato Skins recipe will get you started on the path to whatever your heart is craving. Want them the traditional way? That's what this recipe is, but you can use it as a jumping off point to add whatever you like…
4.84 from 6 votes
Print Recipe Pin Recipe
Prep Time 20 mins
Cook Time 45 mins
Total Time 1 hr 5 mins
Course Appetizers, Snacks and Small Bite Recipes
Cuisine American
Servings 16 potato skins

During my college years, I remember a month where I had close to 0 money and I had to eat potatoes pretty much every day. At that time, I searched on internet every single meal I can make using potatoes... I wish this article was around back then.

thank you for sharing

There is an Irish pub down the road from us that has the best potato skins, but I haven't had them in years. I totally need to make these!