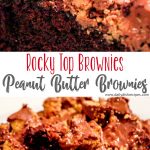 Not only do these Rocky Top Brownies look amazing, they are a delicious combination of chocolate and peanut butter brownies. Super easy recipe!

It saddens me that this month for SRC there were a few orphans. I already mentioned in my other rescue post how that upsets me. It just doesn’t seem like such a hard thing to make sure people aren’t left sitting there with nobody have made anything from their blog. It’s not fun. However, I’m glad I was asked to do two!

When Jane, Group A’s fearless leader, who is filling in for Group B this week, contacted me a second time, I knew I wanted to do it. Close to Home is another blog I am familiar with. I’ve visited her before and was happy to return to make something.

I chose two items. But I’m only sharing one now. I will share the other one Wednesday. For this reveal I chose her Rocky Top Brownies from Southern Cooking Kids Cookbook, but she calls them PB&B which I love – stands for Peanut Butter & Brownies, because that is exactly what they are.

They are also ridiculously easy, which was wonderful since I needed something that didn’t require a lot of work!

They were absolutely amazing! I would make these again and again, and I am not a big fan of boxes mixes of anything, I cook everything from scratch but truth be told, for this – I don’t really mind and now my kids have brownies to take in their lunch the rest of the week.

Thank you so much for such a great recipe, I’m so glad I was able to rescue your blog 🙂 P.S. Check back on Wednesday for the other item I made!! 🙂

These were some of the BEST brownies I've ever eaten. I especially loved the Reese crumbled on top.

Even though I featured these on the SRC site, I just had to drop by and tell you how yummy these look. I have them pinned to try soon. Thanks again for being such an awesome SRC member. : )

Thanks for filling in - I agree, doesn't seem to hard to get up a post if you say you will!! These brownies look AMAZING - brownies + peanut butter are seriously the best combo ever. :)