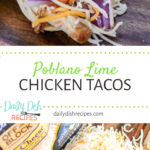 These Poblano Lime Chicken Tacos come together quickly and easily and make a great dinner for busy nights. Savory, with a twist of lime these taco’s are our favorite. 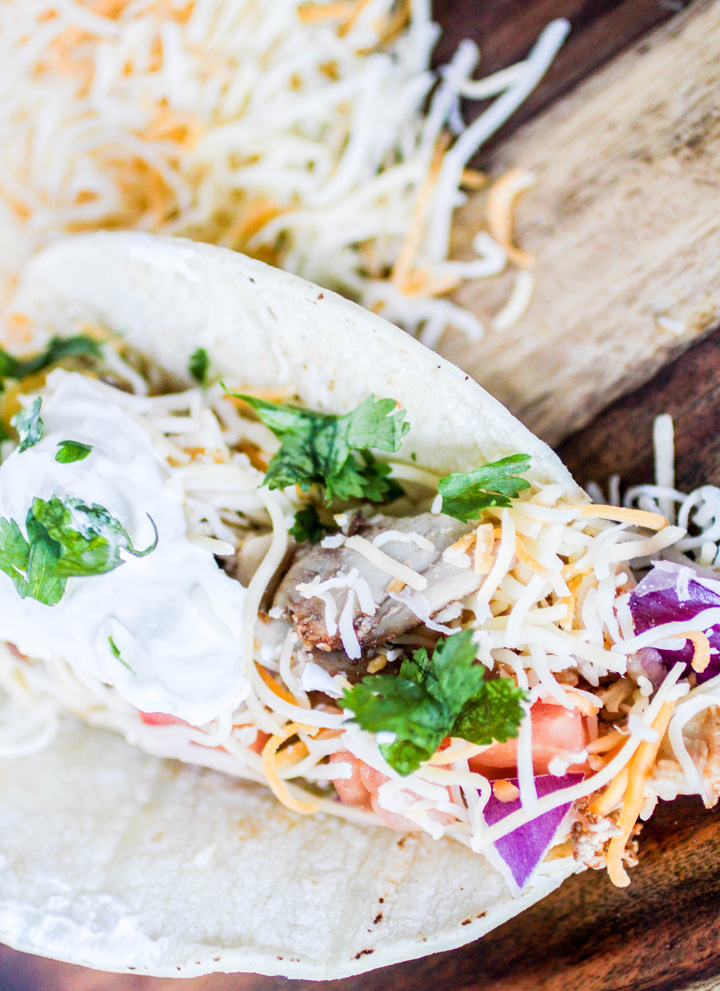 Have you ever watched Food Network’s Chopped?

The concept is pretty simple.

The chefs are given three to five ingredients that are revealed as the timer is about to go, often the ingredients they are assigned are not typically prepared together. They have to use every single ingredient in that round. They also have spices, herbs, vegetables and a refrigerator full of other ingredients they can add. When the clock is done, the judges critique the dishes on presentation, taste and creativity.

I was chosen to participate in the Sargento Chopped at Home Challenge. I was given a theme, and a secret “basket” of ingredients, along with an actual priority item. 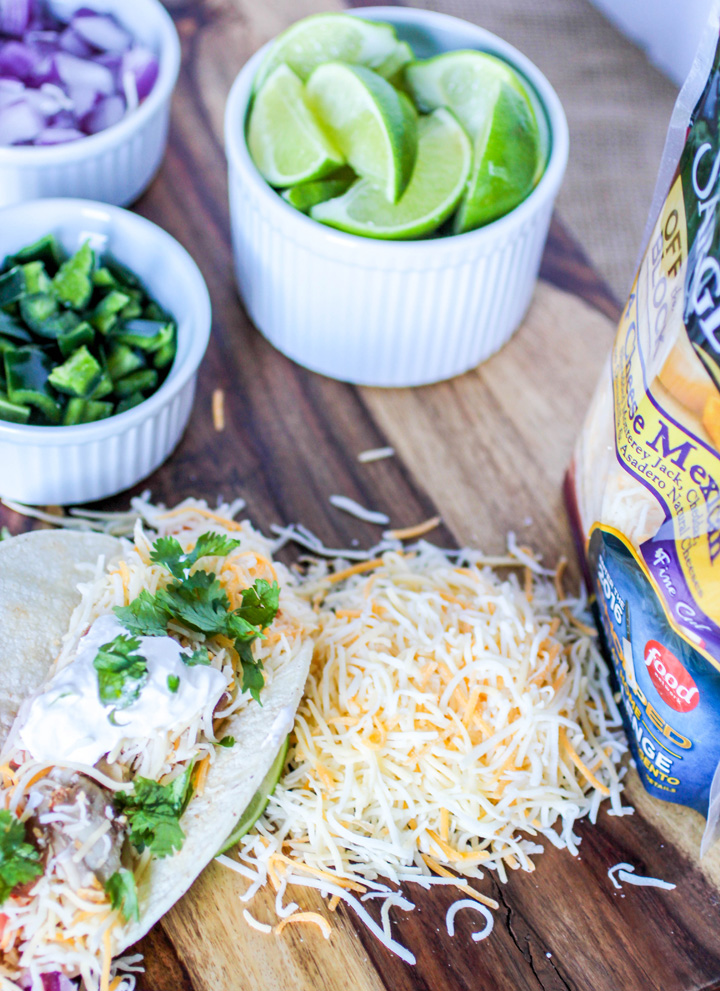 Going in, I wasn’t all too sure what I wanted to do with these ingredient or what I wanted to add. We thought of several different options from enchiladas to burritos and fajitas, but overall, the deal is – I’m a home cook. I wanted to make something that anyone would be at home making. What do people love? Tacos! 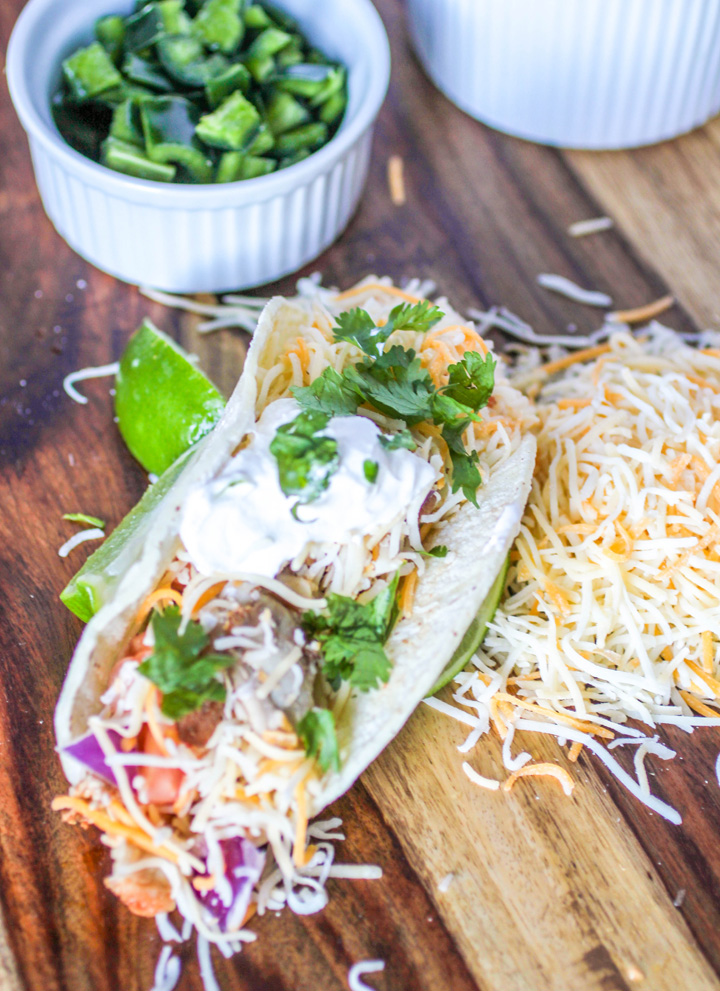 I started out with the chicken thighs. The night before I was ready to make them, I coated them in a spice blend combination of Mexican inspired spices, rubbed them down getting every surface and covered the plate in plastic wrap. I then refrigerated them overnight. You don’t have to do it that way, but the longer you let them sit, the stronger the flavor (recommended 8-10 hours).

When I ready to cook them, I removed them from the refrigerator and let them sit on the counter about 15-20 minutes or so. I decided to cook them in my cast iron skillet on the stove, with a little olive oil and lime.

It seemed like the easiest way for a home cook, but if you want to throw them on the grill or even in the oven – go for it. I cooked them for 10 minutes over medium heat on each side. 20 minutes total. Then I allowed them to sit on the stove for about 5-10 minutes before pulling them apart. This allows the juices to cool and stay with the meat, rather than running out and becoming dry. This is the most flavorful way we have found to cook these delicious Poblano Lime Chicken Tacos. 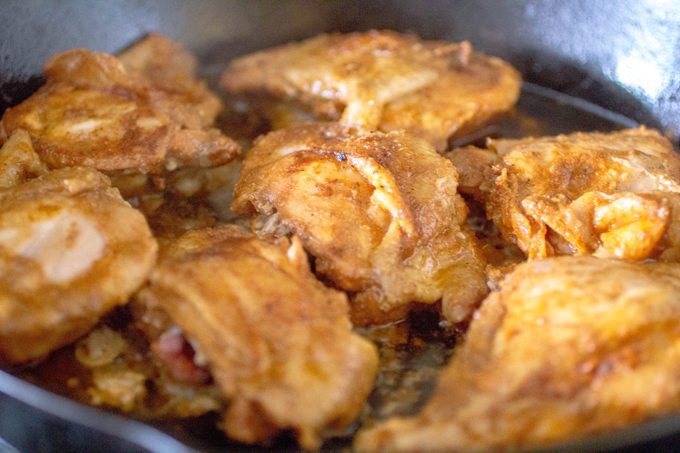 Next I made a Mexican Rice with Lime and Peppers. Red Pepper and Poblano Pepper. I made the mexican rice right there in the same skillet I cooked the chicken in. I added a tiny bit of olive oil, threw in some finely chopped onion, diced poblano and red pepper. I cooked them over medium heat until the onion was translucent.

Then I added half chicken broth, half water – enough to cook the rice. Tossed the rice in, scraping the bottom as I went to get all those flavors up there in the rice as it cooked. The whole process took about 15 minutes. 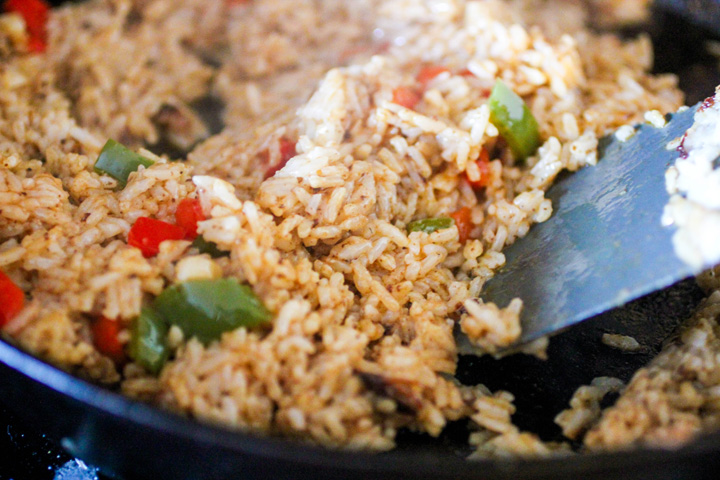 When it was done I squeezed juice from half a lime and tossed the rice to coat. What we had was a wonderful, spicy lime Mexican rice. While this would make a great side dish, it went on the tacos!

And this is where the fun began. We loaded up our tacos with Mexican rice, diced poblanos, onion, tomatoes and that amazing Mexican lime chicken. We topped the whole thing with loads of Sargento 4 Cheese Mexican. Topped that with a scoop of sour cream and cilantro. 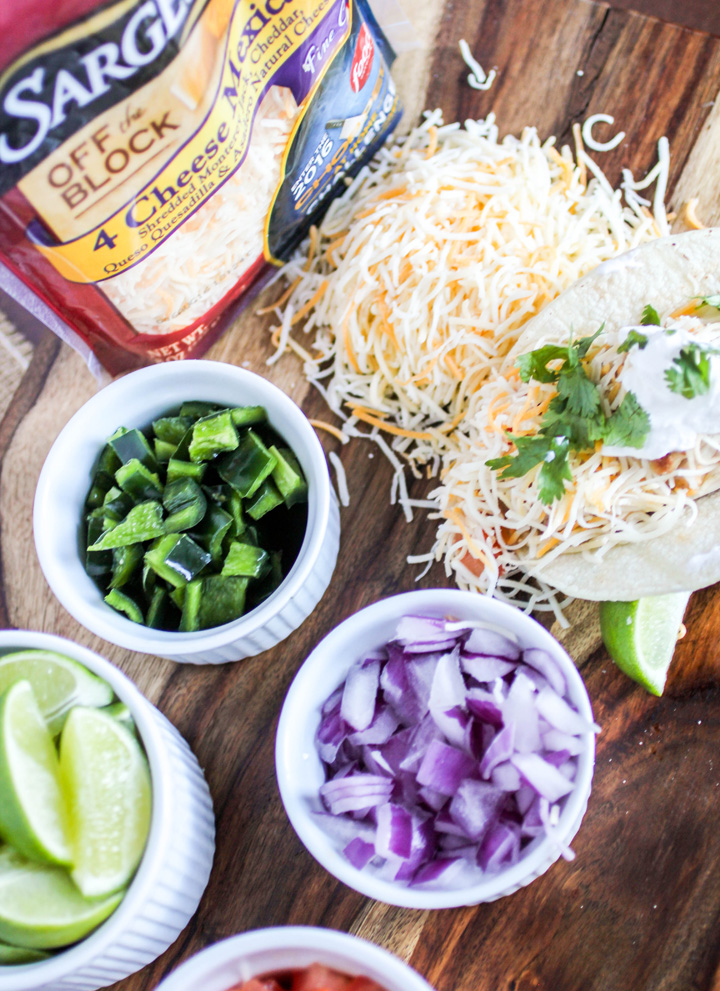 What we wound up with, were some of the most flavorful tacos we’ve ever eaten. These Poblano Lime Chicken Tacos are absolutely our favorites right now. The spice was absolutely just right, not too spicy but spicy enough.

Each bite has a pleasing cool and warm combination – the heat of the spices, the heat of the meat and rice, but the cold of the sour cream and fresh veggies. Just a very pleasant experience on the palate and a flavorful combination of ingredients and spices. 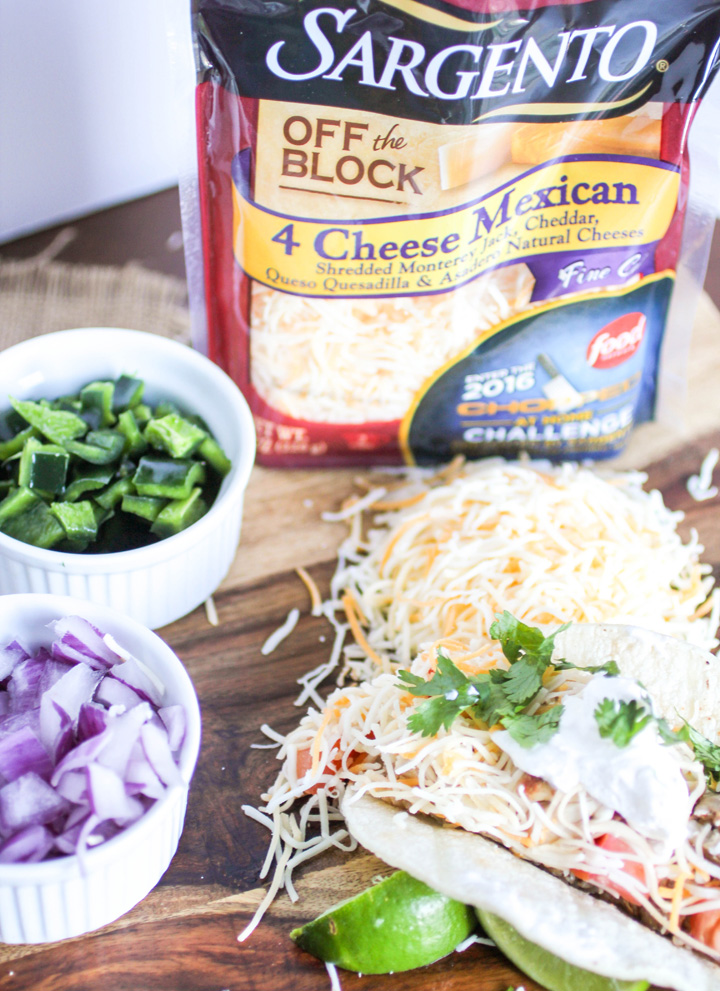 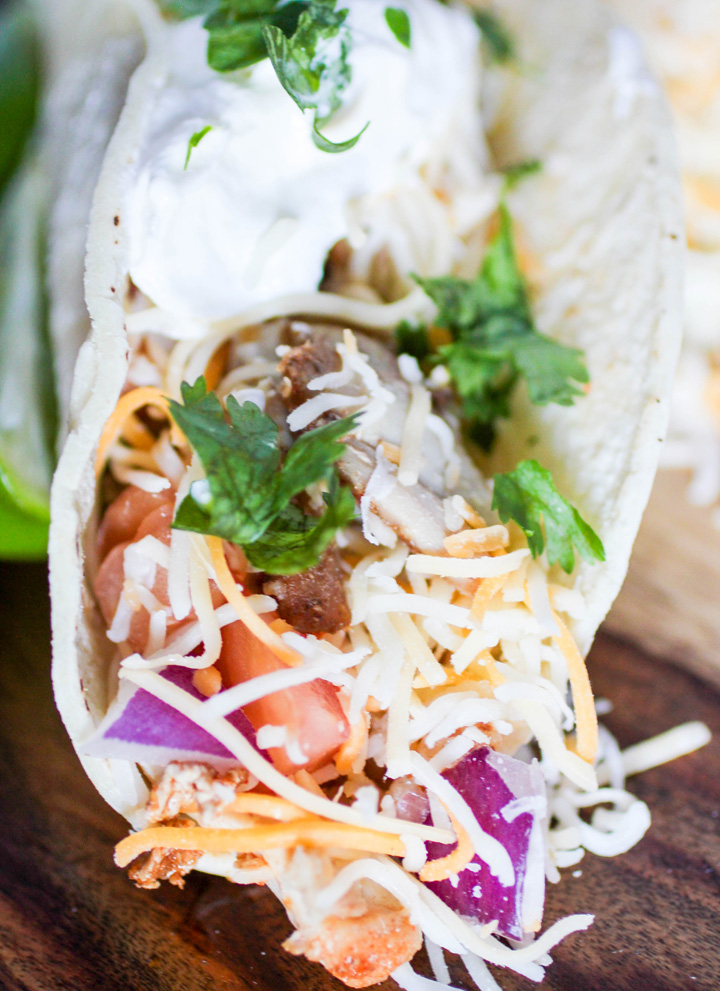 When Ready to Make Dinner: 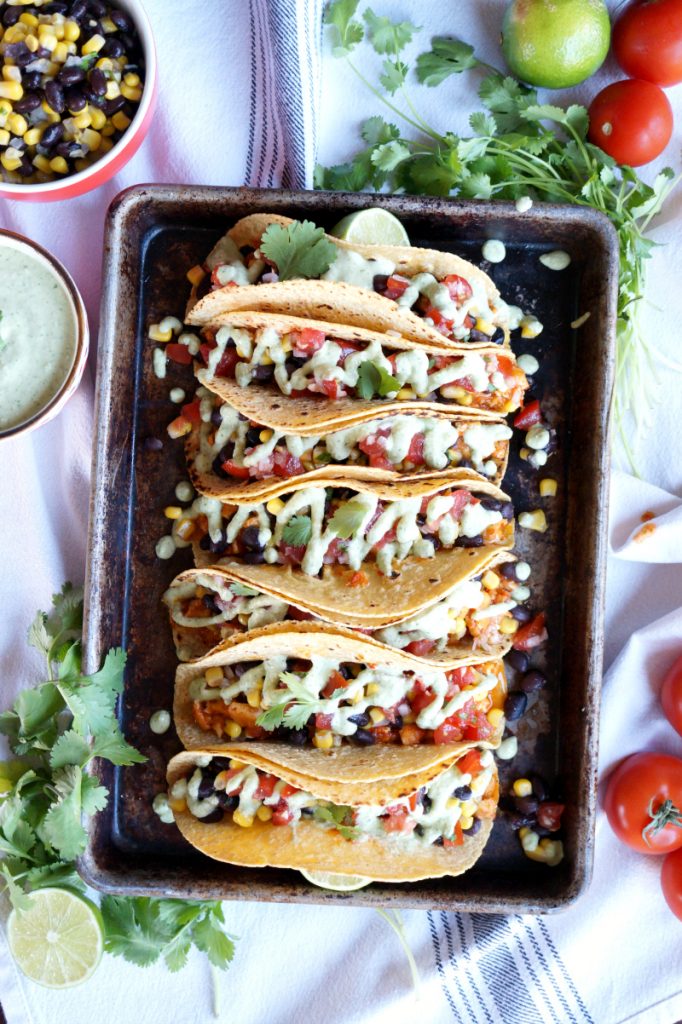 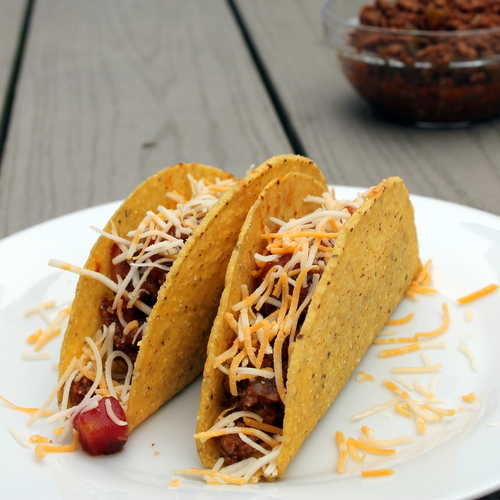 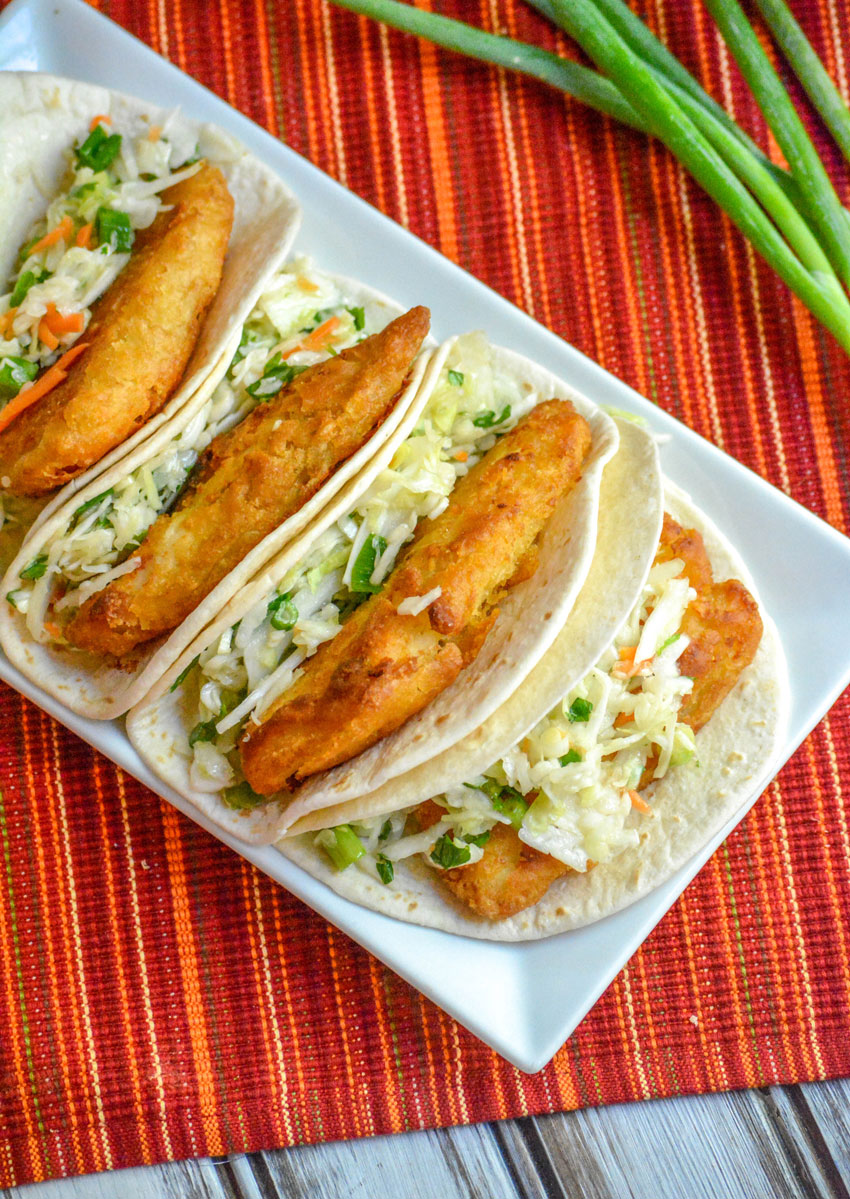 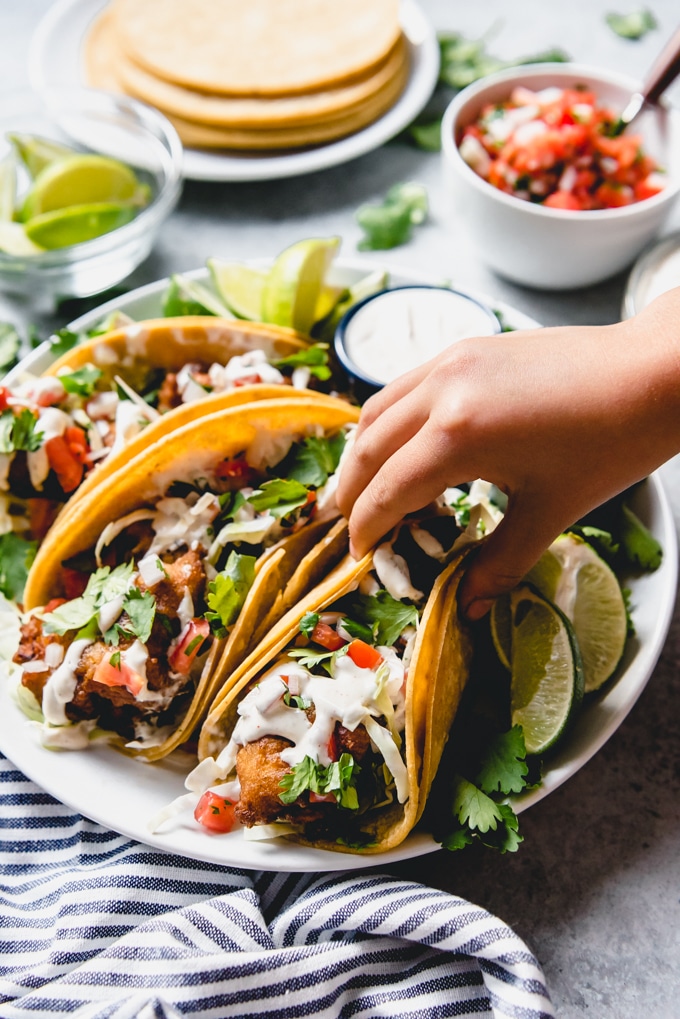 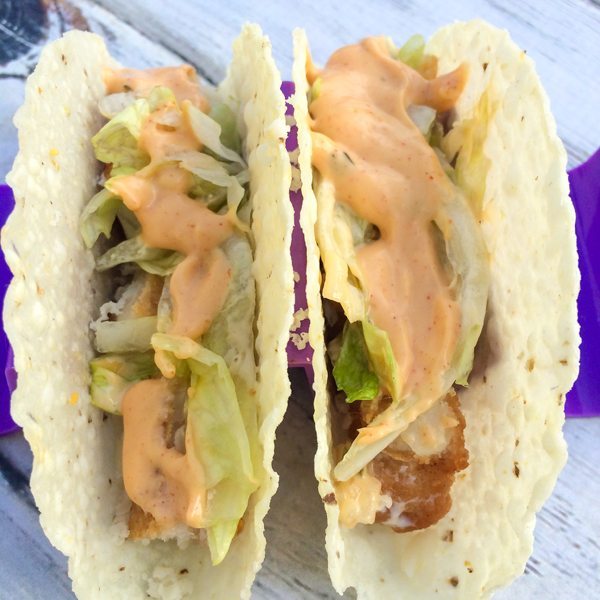