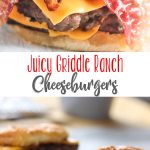 This post is sponsored by Cuisinart. I was given a Cuisinart 360° Griddle Cooking Center to test and create recipes with.  All recipes, images, text and opinions are 100% honest and are exclusively created by and belong to Daily Dish Recipes.

These Juicy Griddle Ranch Cheeseburgers are absolutely mouthwatering. Filled with flavor, they don’t even need much dressing up at all. Try this awesome cheeseburger recipe tonight! 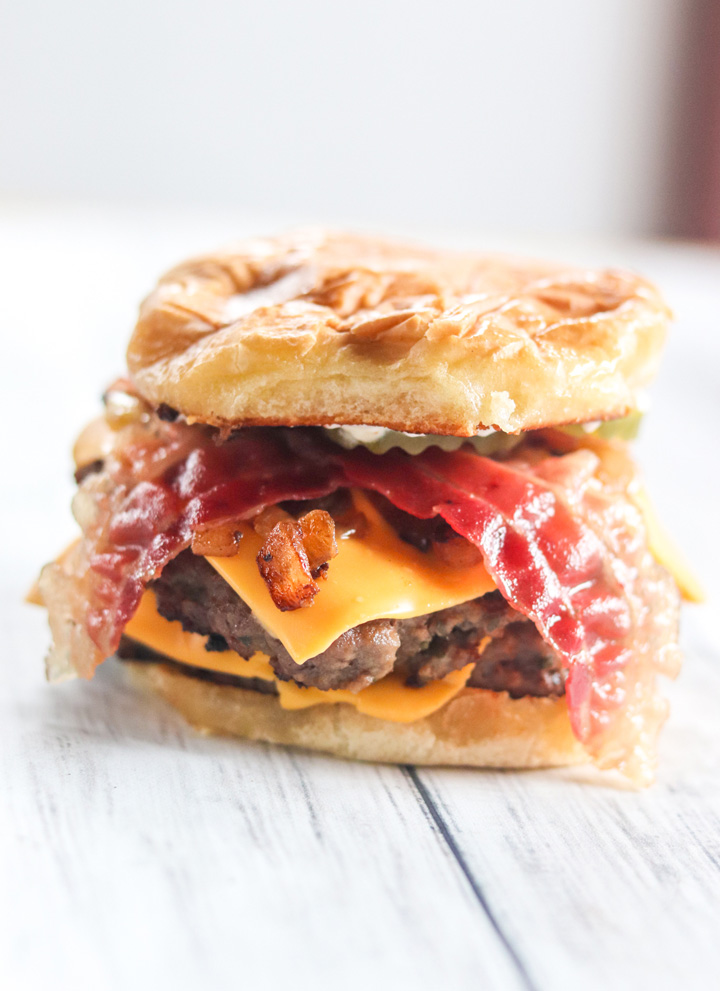 Do you ever wonder how some restaurants get their burgers so juicy but not too greasy? A lot of them use a griddle surface to cook on. It allows the burger to cook in it’s own juices, while allowing grease and fat to run off before serving.

These Juicy Griddle Ranch Cheeseburgers are the bomb! Try them on your griddle today.

For this recipe, I was given a Cuisinart 360° Griddle Cooking Center to try out. It is my new, favorite appliance that I own. It literally cooks EVERYTHING. I love it so much. I have a ton of recipes coming to the blog in the upcoming months for literally every meal; breakfast, lunch and dinner – even dessert! 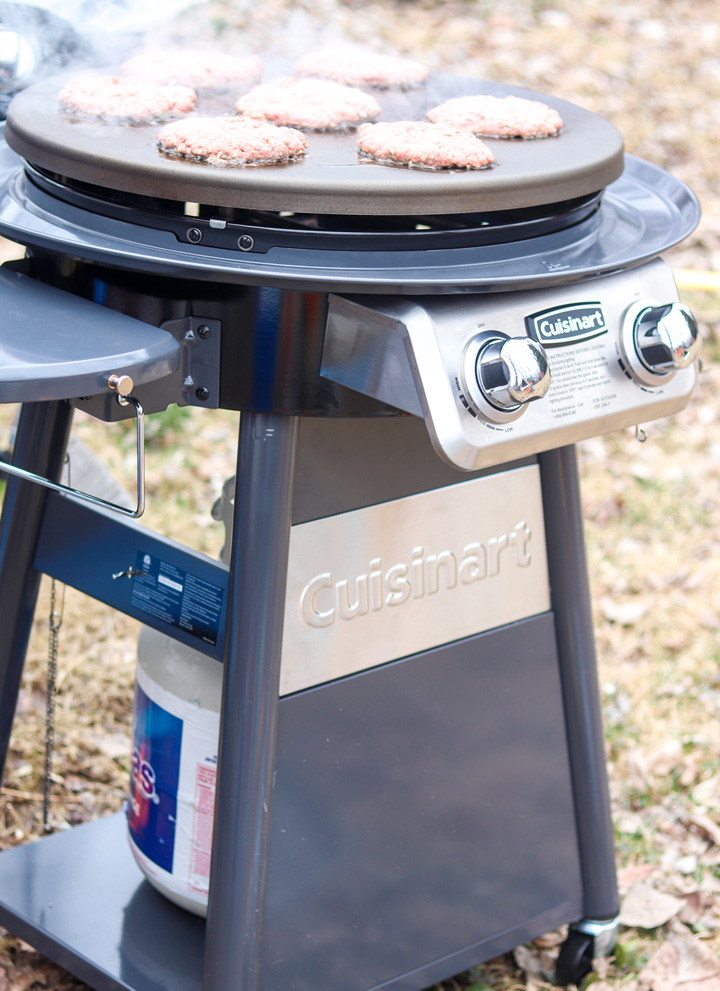 This thing has a HUGE cooking surface allowing for a lot of different items to be on it all at once. I loved that, because it made meal prep so much faster!

For these burgers, we were able to fit five ¼ lb. burgers, four buns, both top and bottom and about a cup of chopped grilled onions – all at one time without anything touching (except the overlapping cheese *grin*)

And it cooked everything to perfection. 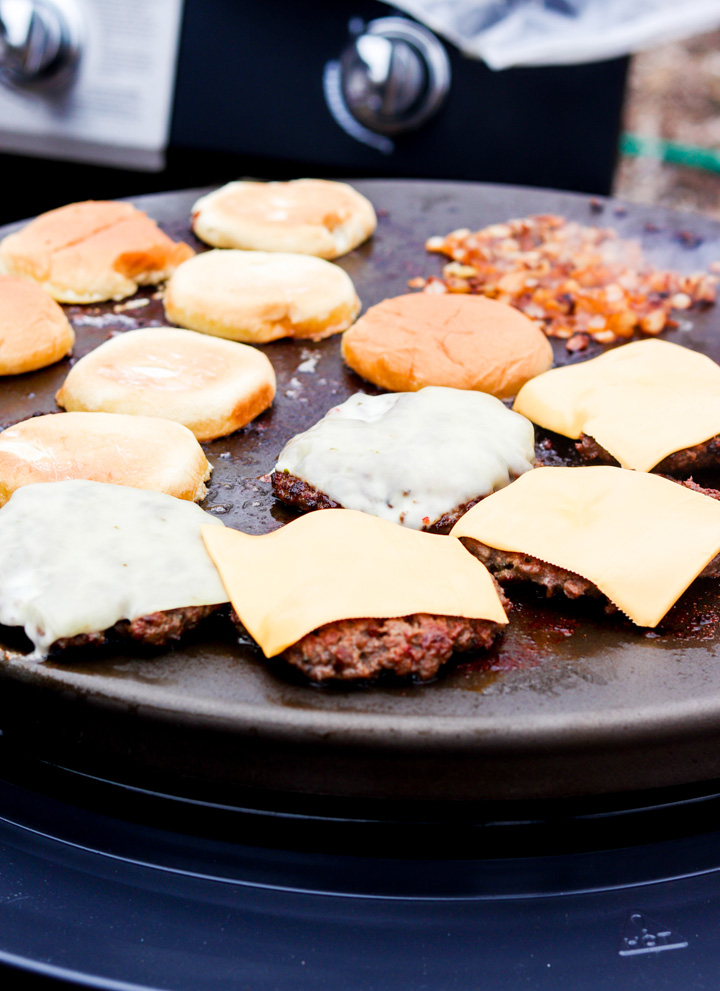 The Cuisinart 360° Griddle Cooking Center is so versatile too, which makes it a real favorite for me! It has a 22-inch diameter cooking surface, a large stainless steel lid with a vent that fits perfectly on the cooking surface. That vented lid allows for steaming, roasting, smoking or simply keeping the food warm until you’re ready to serve it.

It has a foldable side tray for utensils or plates or meal prep.

One of my favorite parts is the 360° grease pan and rear grease cup it has. It makes cleaning this thing SOO easy which is extremely important to me. It also has a quick access paper towel holder which is great. 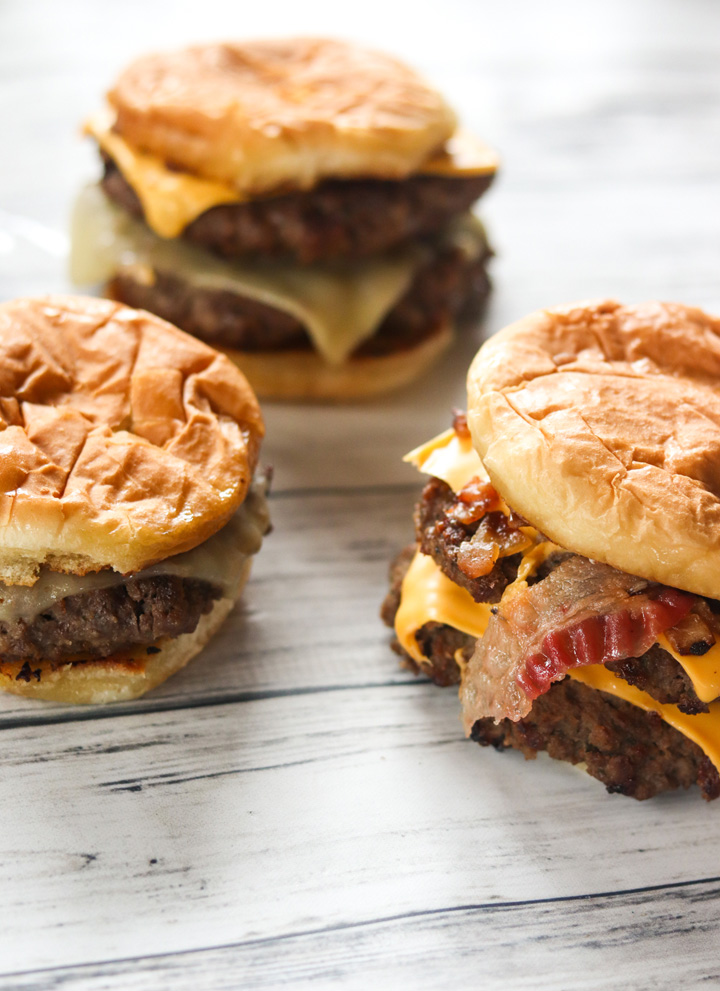 The burgers came out so juicy and were so full of the delicious ranch flavor I was going for.

Juicy Griddle Ranch Cheeseburgers will be a new favorite for your entire family.

My family raved about them, and the flavor – and requested them two days later again. And now we’ve made them several more times.

Good thing they are super easy! 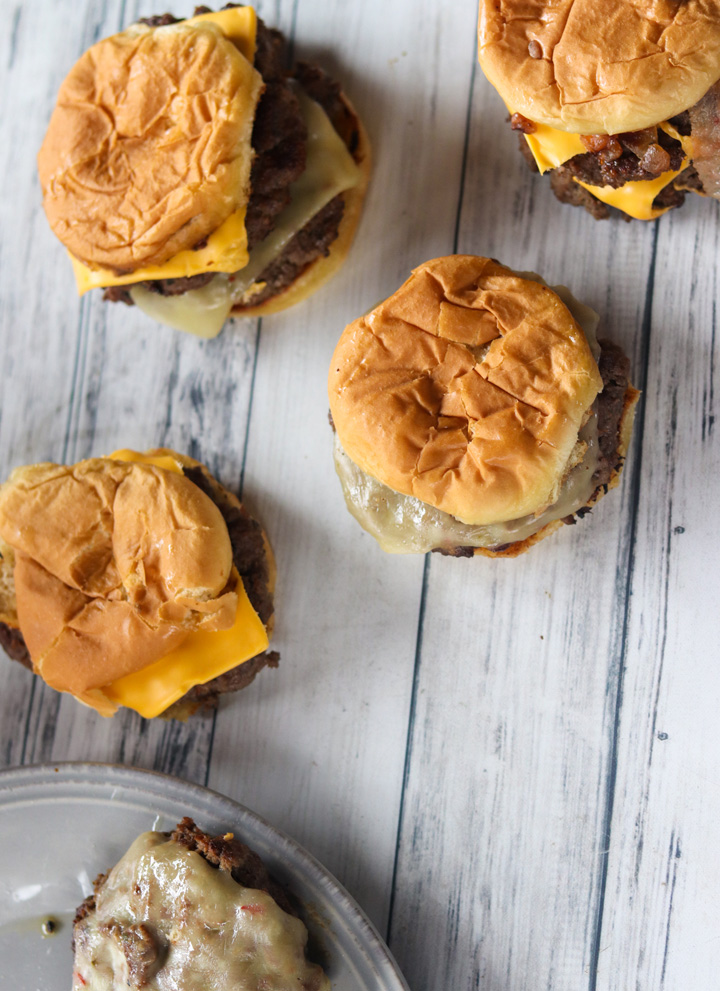 Everyone likes their burgers a little different around here. Some like it loaded with veggies and the works, some only like bacon.

The best part of these Juicy Griddle Ranch Cheeseburgers is that they are so full of flavor, they are great all by themselves too!

I won’t lie though, add some bacon, pickles and mayo and you’ve got me sold.

Also, feel free to play around with your favorite cheese. We used what we had on hand which happened to be cheddar, american and pepper jack, but there is not a single cheese that wouldn’t be delicious on these. 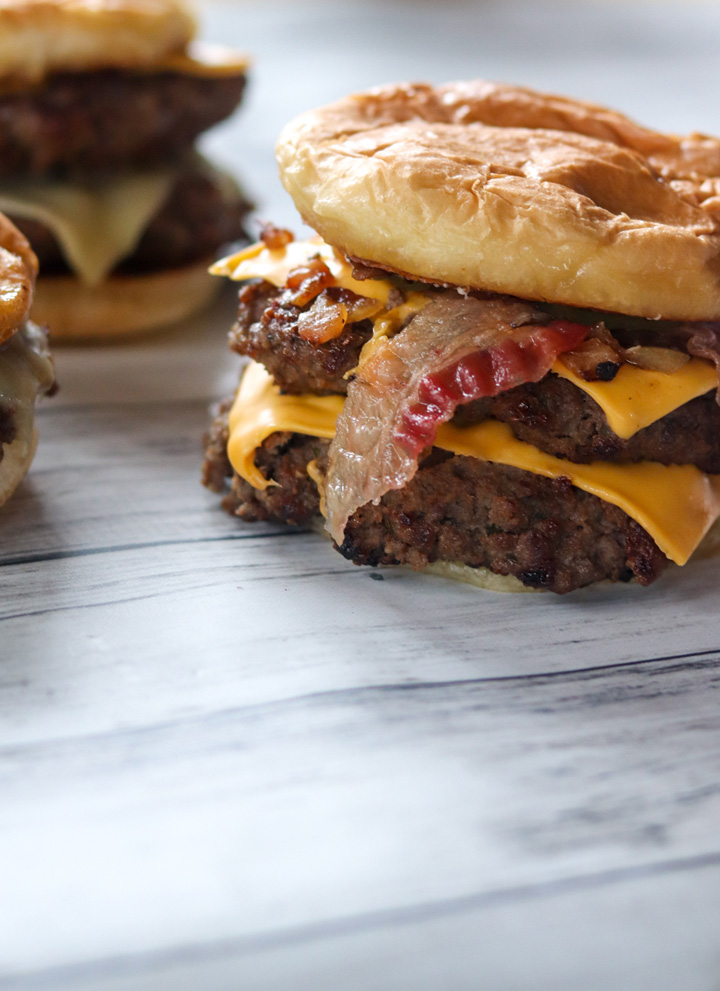 Also, check out these other Cuisinart 360 Griddle Cooking Center Recipes 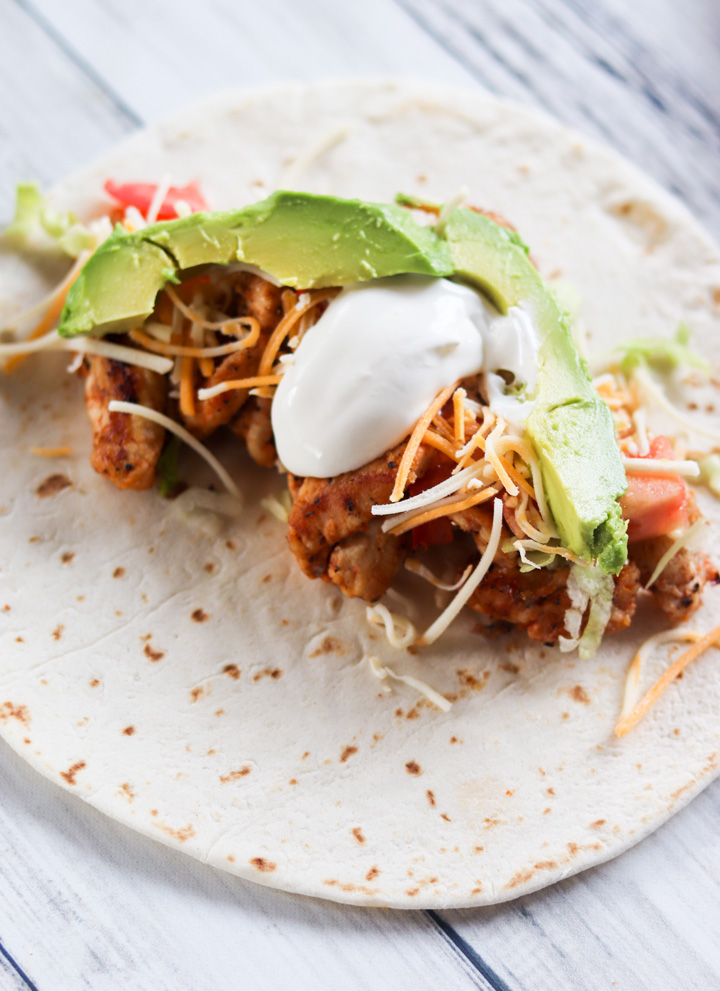 Are you ready to make these Juicy Griddle Ranch Cheeseburgers?

Scroll down to get the recipe. 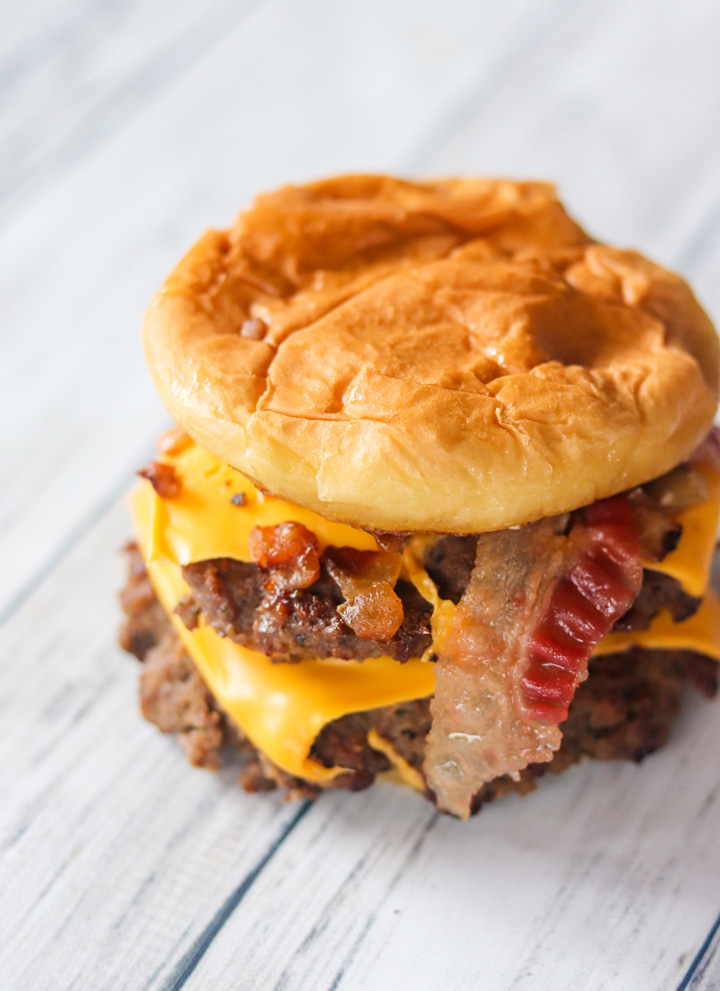 As an Amazon Associate and member of other affiliate programs, I will earn a small commission from any qualifying purchases. There is no additional cost to you.

Keep watching for more great recipes using the Cuisinart 360° Griddle Cooking Center. Any griddle will work, but this thing is absolutely my favorite so it’s what I will be using for any of my griddle recipes.