How much fun is it to reminisce about days gone by? It’s called memories, and we love them, we crave them and they take us back to a place that was both comforting and safe. Sometimes a memory can be triggered by a smell, or something we see, reminds us of something else. But for someone like me, it’s food memories. Memories of foods from my past always elicit warmth and comfort that seem to reach right down to my soul. This week’s theme is a “Retro Recipes” theme! It has been so much fun seeing the titles of the other participants and seeing what everyone is sharing. I’ll be super honest, I had no idea what made a recipe retro, but figured if it was supposed to date back to my childhood, I was sure I could come up with something. What’s more retro than Coca-Cola®?

I chose Coca-Cola® Cupcakes to share with you today, because they are not only retro but because someday these will be a memory for my own children – a food that will bring them back to a time that is comforting. The funniest part of this recipe, is that I never did eat Coca-Cola® Cake (or cupcakes) as a child. And *gasp* I have a little confession… I don’t actually like them that much. I know, I know, right? But my kids do. And will happily devour half a cake in one sitting, anytime I make it for them. My friends do too. Even my neighbors do.

I think I’ve just been spoiled by this cake, (which is my very favorite cake in the world) because it’s just not the same – it’s probably not a retro cake, but it’s a HUGE part of my childhood.

Today I decided to do Coca-Cola® cupcakes and pop them in a jar because they are just easier to serve and handle and well, because my kids will be taking these to school with them this week and I wanted them to be convenient to take. Nothing worse than getting to school, opening your lunch and finding a smashed piece of Coca-Cola® Cake or a cupcake in your lunchbox. Nope. So cupcakes in a jar  it is.

And apparently cupcakes with Coca-Cola® because well, what would a retro recipe be, without Coca-Cola®?

I guess it would be a retro recipe without Coca-Cola®… anyway. Moving on.

You should see all the great recipes on the Coca-Cola® Website too … you can make all sorts of things with it – who knew? I don’t typically cook with Coca-Cola®, but if I ever decide to again, I know where to go. Awesome. So, about those cupcakes. Here’s how to make them.

To Make the Cupcakes:

To make the frosting: 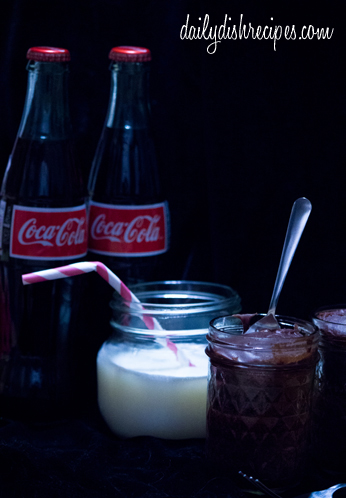 Are you ready for some great retro recipes? Take a look at what the Sunday Supper group is sharing today:

Hi there. The current Food on Friday on Carole's Chatter is all about favourite foods from childhood. I do hope you link this lovely one in. This is the link . Please do pop back to check out some of the other links. Have a great week.

Coke cake?! Must try! Thanks for sharing this recipe.

I never knew that you can make so many things out/with coke. Wow!!! These cupcakes look fantastic :)

I've never had a coca cola cake before so I'm totally intrigued. I'd love to give these a try!

I've had a Coca-Cola cake and it was nothing like this. I would love to have this version. Thanks for sharing it for our retro Sunday Supper!