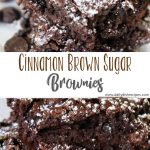 This is my second recipe for #Choctoberfest, and today’s recipe highlights Imperial Sugar. They sent me plenty of sugar to create some goodies. Thank you Imperial Sugar.

I love using Imperial Sugar in my baked goods.

And in these amazing Cinnamon Brown Sugar Brownies, rather than your classic granulated sugar, we are using Imperial Sugar Brown Sugar.

One of my favorite parts about this recipe, is how incredibly easy it is. Everything is made in one bowl, so less clean up.

And who doesn’t love that?

I love just about any recipe that requires only one bowl.

Yes, I topped these with sifted Imperial Sugar Powdered Sugar, but you definitely don’t have to.

I did it because it makes them look so pretty. Almost like snow. But I’m not ready for snow just yet.

So why not get it the artificial way?

So why am I even talking about snow? Because I ALSO chose to use Cinnamon in this recipe.

Have you ever had a chocolate brownie with cinnamon in it?

It makes you think of Fall and Winter, or Christmas. It’s comforting and warm.

It adds an additional flavor layer that isn’t usually there.

These Cinnamon Brown Sugar Brownies are one of our favorites to make this time of year.