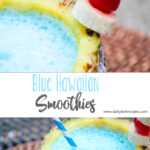 A Twisted Blue Hawaiian Smoothie is a really fun and refreshing twist on a traditional Blue Hawaiian Cocktail. This is a fantastic adult smoothie for any occasion!

Who doesn’t love a good smoothie?

How about an adult smoothie that carries you away to a tropical island.

Or maybe it brings you poolside soaking in the sun and sipping on a fruity beverage with a paper umbrella?

Today is the letter U in the #atozchallenge and it isn’t easy coming up with a recipe starting with a U without being a little creative.

Last year, I struggled until I discovered Ugli Fruit and created an Ugli Fruit smoothie.

I considered coming up with another Ugli Fruit recipe except I haven’t seen any at our local fruit stand this year.

Nor does my grocery store have any available. So that was off the table.

It finally came to me during a rather strange moment.

While reading an alphabet book to my nephew after a particularly stressful day, I was wishing I was anywhere but there and could have used a nice fruity cocktail.

I laughed out loud when we reached the letter U in the book and the umbrella pictured was a paper umbrella.

You know… the kind from an Umbrella drink. Why that’s in a children’s book, I’ll never know.

But it got my wheels turning and was certainly appropriate for the recipe at hand!

Thus I decided that would be my letter U.

And I chose a fun, tropical combination – similar to a Blue Hawaiian except I turned it into a smoothie. Just ’cause.

But if you want a non-frozen option, you should give this Grilled Spiced Blue Hawaiian Cocktail recipe a try.

But back to the Blue Hawaiian Smoothies.

Did I mention I served them up in real pineapple cups?

I made a few extras so the teens could have some non-adult smoothies that I blended up similar to the alcohol version.

They loved them. And begged me for them the next day… and the next.

They are super fun!

We even froze them ahead of time.

This way, they stay cold for quite awhile.

They look really pretty with the frosty outside filled with the bright blue smoothie!

Plus they keep the smoothie from melting quickly which was pretty awesome, and a huge plus – just sayin’.

Nobody likes a melting smoothie!

These are absolutely fabulous for a pool party, a beach gathering or whenever the mood strikes, like us! haha

Side note on the pineapples:

After we had finished off our smoothies, we rinsed them out with cold water and returned them to the freezer so we could have some more later. I was surprised to see no residue or dyeing – so beware that anything with dye could stain the pineapple.

I’m really not sure how long they actually last, we used them less than a handful of times across about a week. As long as you freeze pretty quickly, you can get a few days or uses out of one.

Are you ready to make these delicious Twisted Blue Hawaiian smoothies?

OMG! I want this right now!

Nicole, why must you torture us this way? God, what I wouldn't give for a frosty pineapple cup filled to the brim with this gorgeous blue Hawaiian smoothie! I don't think I drank anything this unique while I was IN Hawaii. Love this!

What excellent looking recipes. I am now hungry and thirsty.

Dear lord, I think I just drooled on myself.

Yummmmmy ! In my office digging through paperwork and so wishing I could have this !!!!