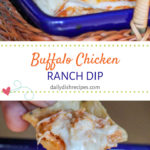 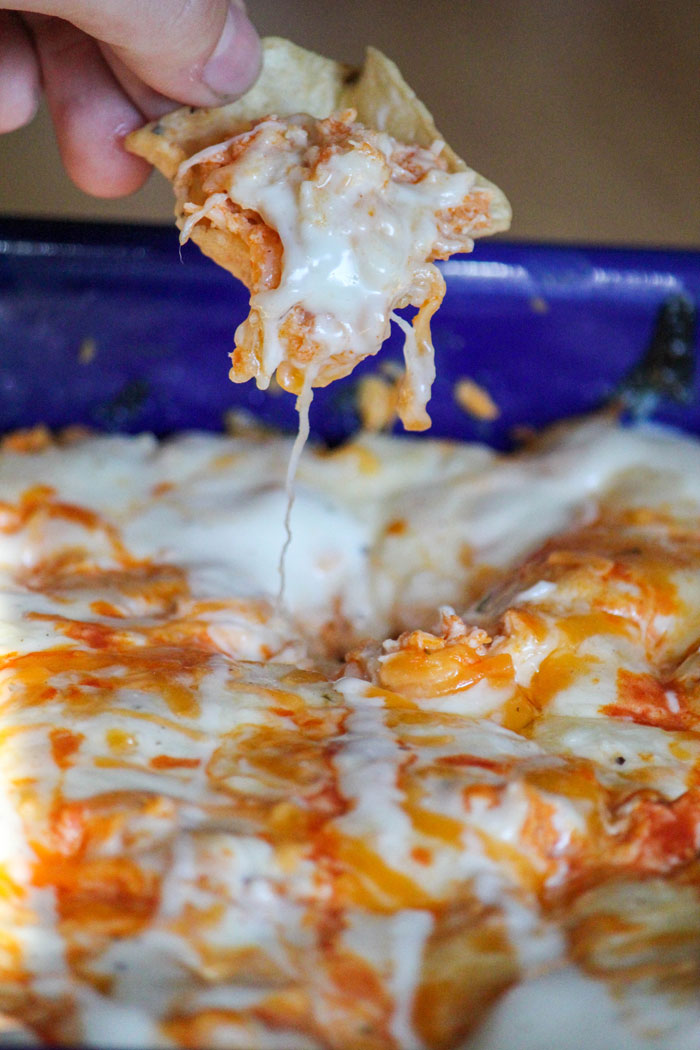 My daughter got the first taste of this yummy Buffalo Chicken Dip with Ranch.

Do you have a food or a recipe that when you make it, you automatically feel comforted? Maybe you make it because you need to feel comforted. Yeah? Me too. Mine is usually brownies or some kind of chocolate cake and sometimes even ice cream. This time however, I opted for something a bit more savory. Our favorite Buffalo Chicken Ranch Dip Recipe. I’ve seen about a million different recipes for buffalo chicken dip running around online lately so it’s become quite popular.

I can’t remember where this particular recipe came from originally, probably Taste of Home magazine sometime in the late 90’s. I don’t really remember where, but I do remember having it on a cut out from a magazine at one point. I made it shortly after I found it, and I’ve made it quite a few times now, but I haven’t made it in a long time. It’s so ridiculously easy and I don’t measure things out very often so… the recipe might be a little different from the original I got from wherever and is probably very much mine at this point. I made it because as I mentioned, I  needed some comfort food which came in the form of this yummy buffalo chicken dip. Why did I need comfort food? 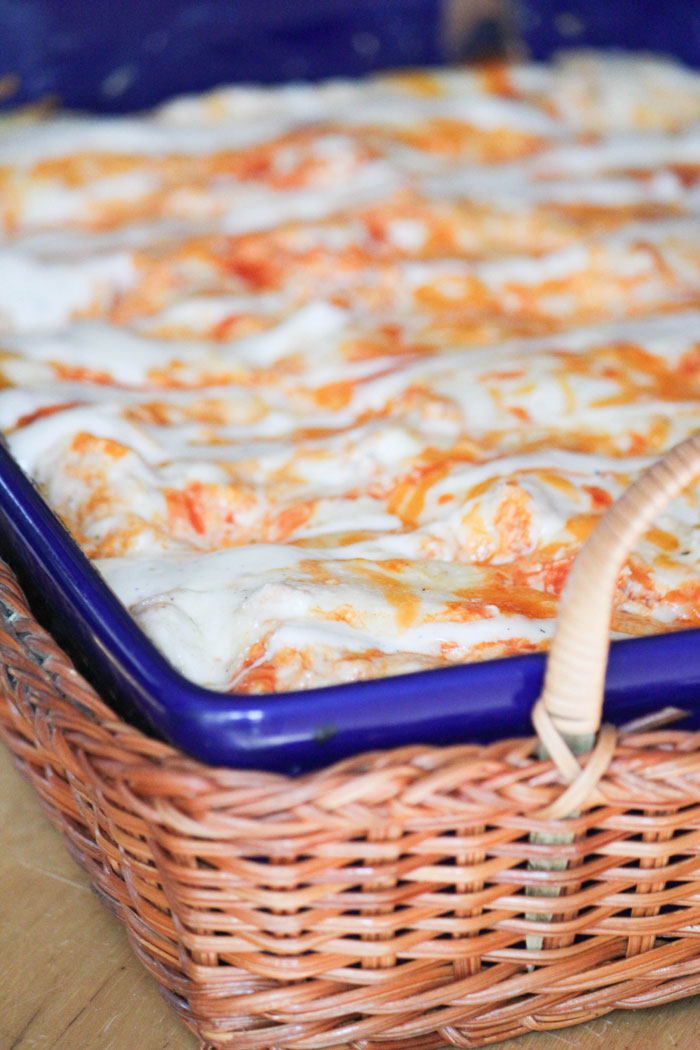 I’m sure some of you have noticed that I have not posted much in the past two weeks. I’ve been up to my eyeballs in tech support and I’ve been super busy working on my friend Isabel’s blog in which we have done a major layout and design overhaul, and we are in the process of creating forums for #SundaySupper and some other cool features.

As if the tech support job and my other blog (www.alltriberr.com) which desperately needs a design overhaul itself, wasn’t enough – I decided that now would be a great time to become President of the group my children belong to. Don’t even ask me why. Okay, well personally I know why, but … did I not already have enough stuff on my plate? One night after a board meeting while I was working on paperwork and trying to answer emails and get organized, I was seriously questioning my decision. It was about this time that I realized I might need some comfort food. I had originally reached for the Roasted Banana and Coconut Ice Cream that we had made the day before, but I realized I wanted savory… that’s when I headed for the kitchen to make  some Buffalo Chicken Ranch Dip. Yeah. Truthfully making it helped a lot – because you see, cooking and baking in my kitchen makes me feel better. Do you relate?

Oh but that’s not all.  No that would be enough for any normal person. I am however, not normal.  A day later, I got some news about my mom I’m not taking well. I mean, she’s fine… but… yeah. If I need to, I’ll share more at a later date. I guess if you are someone who prays, I’d really love it if you could say some prayers for her… and maybe for me. Because you see I ate probably a ¼ to half of this buffalo chicken dip all by myself because of all the stress lately. And… well, I probably shouldn’t do that too often. Thankfully the kids rescued me and pretty much packed away the rest of the dip and all of the chips, so now I won’t be tempted… until I make it again.

Right, so… I’ve missed you guys. Like… a lot! That was really the point I was getting to. Blogging once a week, (twice this week) is not working for me. I miss it. In fact, it’s a stress reliever all in it’s own right, and I want to make sure it plays a major part of my life, because without it, I make huge batches of Buffalo Chicken Ranch Dip, eat most of it myself and then if I didn’t blog, I wouldn’t share the recipe – so what would the point be?  And then you’d miss out too. Just saying. 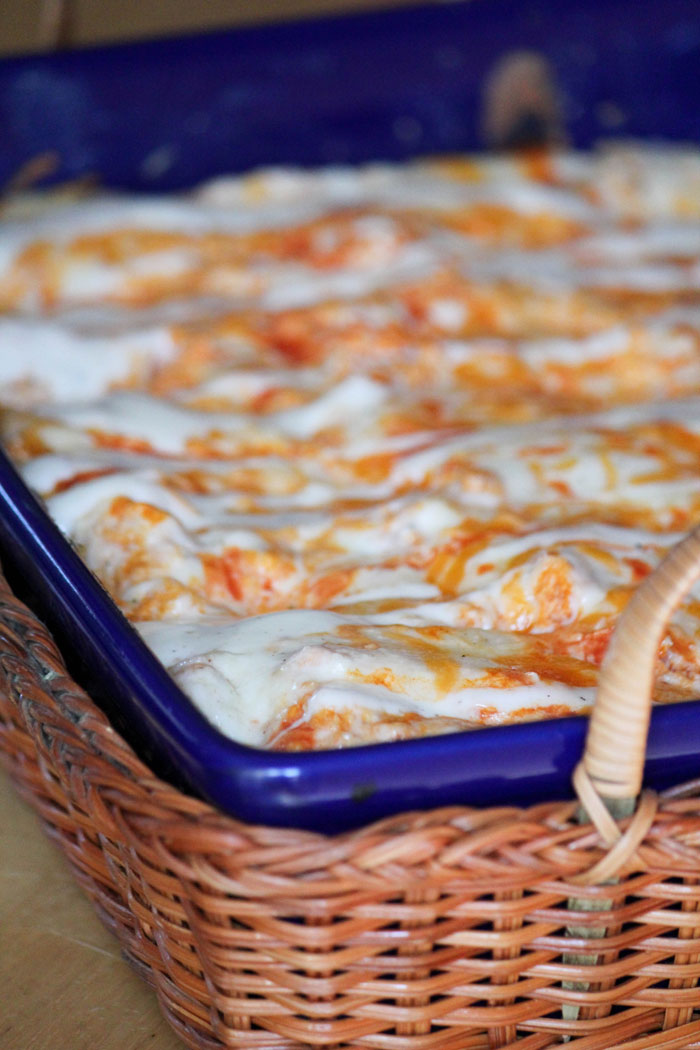 This Buffalo Chicken Dip with Ranch has so much cheesy goodness, mixed with the tang of the buffalo sauce and ranch dressing. OMG!

Note: If you decide to cook the chicken in the Crockpot specifically for the Buffalo Chicken Ranch Dip, you can just pour the bottle of hot sauce or wing sauce right in there with it with about ¼ cup of water and let the chicken cook right there in the hot sauce. I do recommend having some hot sauce leftover to drizzle into the shredded chicken before placing it in the buffalo chicken dip. 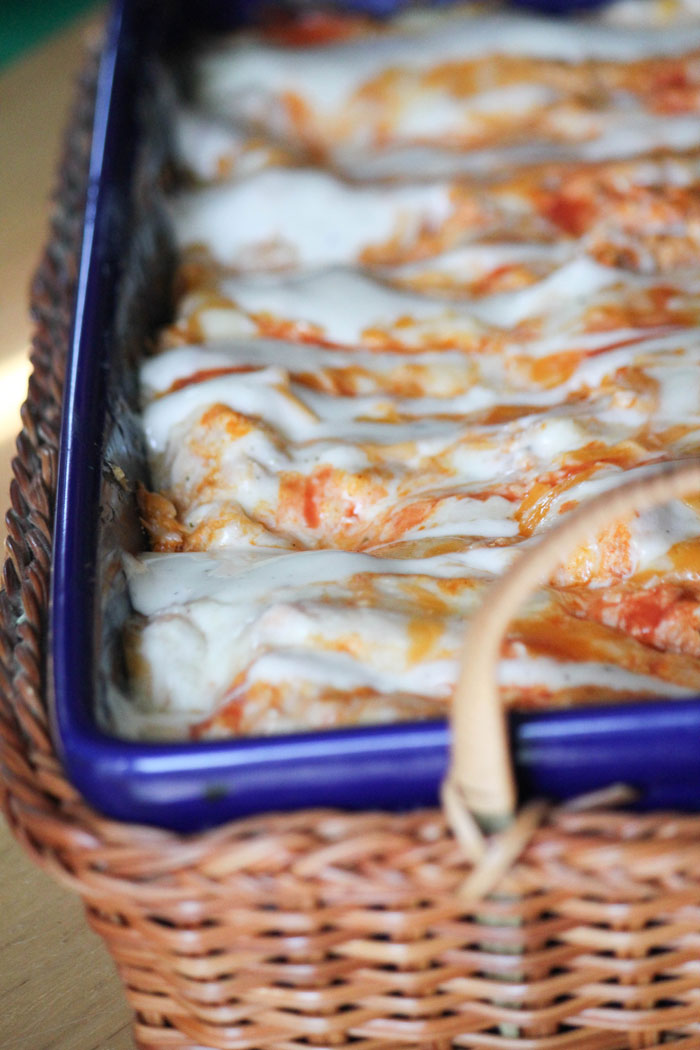 Have you tried a buffalo chicken dip recipe?

YUMMY!!!!! Thanks for sharing your recipe! I’ve heard about your blog a couple of times and will now spend my afternoon reading :)

What was the hot sauce called that you used for this recipe? Looks amazing, I can't wait to make it!

Wow. Aside from this awesome recipe, I'd like to thank you for the simple kitchen hack you shared today, I should stock more of flaked chicken breasts in the freezer from now on for soups, salads and yes, this fabulous chicken dip!

Thank you so much for this recipe! my husband and I are devouring it right now!!!

Have you ever tried to freeze leftover dip?

I have not ever tried to freeze leftover dip. I am not sure how it would thaw, mostly because of the addition of the ranch, and I dairy doesn't freeze well. Sorry!