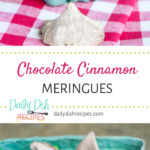 Light, fluffy Chocolate Cinnamon Meringues are a fun treat, dessert or a great gift idea for someone else!

These Chocolate Cinnamon Meringues are not only very simple to make, they are delicious and full of lots of chocolate and cinnamon flavor!

It’s time once again for this month’s SRC (Secret Recipe Club) reveal and this month I found it harder than ever to choose a recipe.

In case you were unclear of how the Secret Recipe Club works, here’s a quick explanation.

You are assigned a blog and you keep it a secret, you have a couple of weeks to choose a recipe off it, make it and then we have a reveal day where we reveal which blog we had, and what we chose to make.

This month, I was assigned Claire K Creations and wow, just wow.

The sheer number of recipes that were screaming my name, quite possibly were a major percentage of her recipes.

I narrowed it down to these Chocolate Cinnamon Meringues, but it was NOT an easy decision. At all.

In other words, if you love my blog recipes, I can’t imagine you wouldn’t love hers, because her recipes are all the things I would make.

There were just so many choices.

Then there’s the savory side, Saffron Potatoes, Spaghetti with White Truffle Oil and Bacon and Chicken and Feta Sausage Rolls.

Do you see where the dilemma was? Amazing choices!

We picked the Chocolate Cinnamon Meringues because my daughter and I have been talking about making Meringues forever and when we saw the combination of chocolate and cinnamon, we were sold.

Thanks for a great recipe Claire, we know we will be making these again and again!

I frequently make ice cream, which requires lots of egg yolks. Now I have a great accompaniment that uses the whites!

This is my first visit to your site and I'm salivating. I could spend hours looking through your recipes and I can feel the weight coming on just from looking.

My sister and I use to call my brother toothpick because he was so skinny. All we had to do was watch him eat ice cream and gain weight. Why we were blessed with horrible genes I have no idea. So that's kind of what I felt like looking through your site.

I do like meringue cookies and my Mom makes what she calls Forgotten cookies. They are similar to this but with chocolate chips and nuts. My niece will eat the entire can if we don't take it away from her. I'm definitely sending her this recipe, she's going to go nuts.

Thanks for sharing this and I'll be back for another visit soon. Hope you're enjoying your week.

Great choice and I love the beautiful blue container - catches the eye instantly!

meringues are always so good! yours look wonderful. and i love that flavor combo too.