These Caramel Walnut Ritz Cracker Bites are perfect for a potluck, party or friendly get together. Kids love ’em and so do adults! My teens devoured them!

Today is the last and final day of the Secret Recipe Themed Reveal. The themed reveal is something that was started originally to make up for the extra Monday that some months have.

This is because no Secret Recipe Club reveal would normally have posted that day. Today’s reveal theme is Fall Dishes. We made these Caramel Walnut Ritz Cracker Bites for our Halloween party and they were a huge hit! 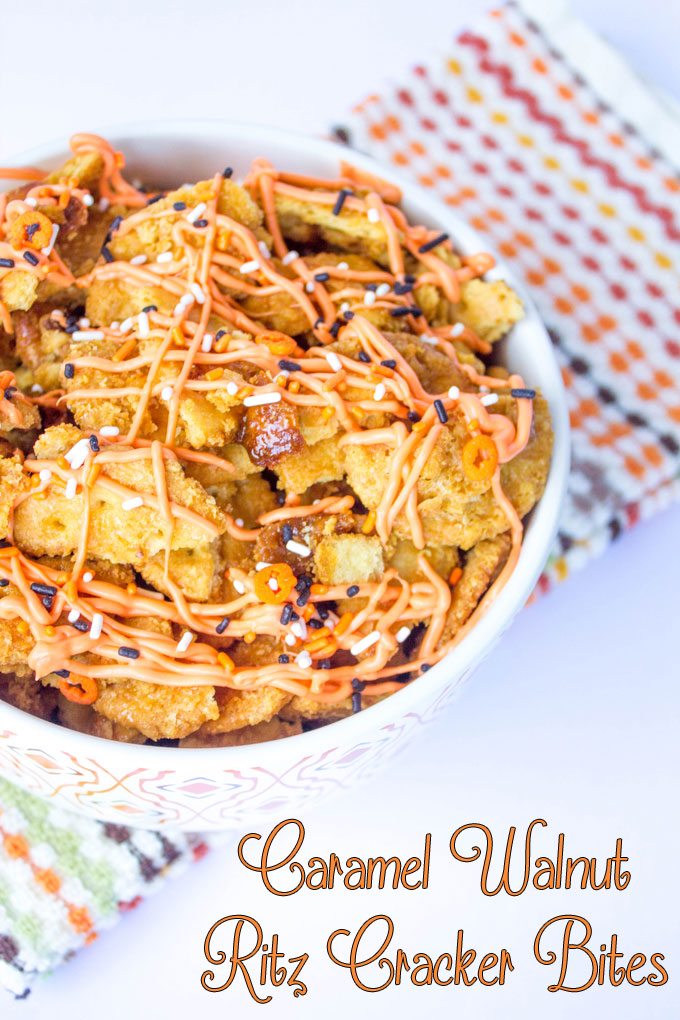 My themed reveal blog was The Pajama Chef, written by Sarah and filled to the brim with delicious recipes! It was a tough choice this month because she had so much deliciousness going on.

Almost immediately when I started looking at her blog, I fell in love with the S’mores Bundt Cake which is similar to something I make.

But alas, it was a former Secret Recipe Club recipe, so I had to move on.

My bucket list will show you that I have the desire to try making soft pretzels and haven’t yet. When I found her Bite Size Big Thumb’s Up Soft Pretzels, again I was like… oh yes! However time was more of an issue with this one, plus I suppose they aren’t very Fall-ish.

I finally settled on her version of Linda’s Caramel Ritz Bits Crackers that she made from The Potluck Club Cookbook. 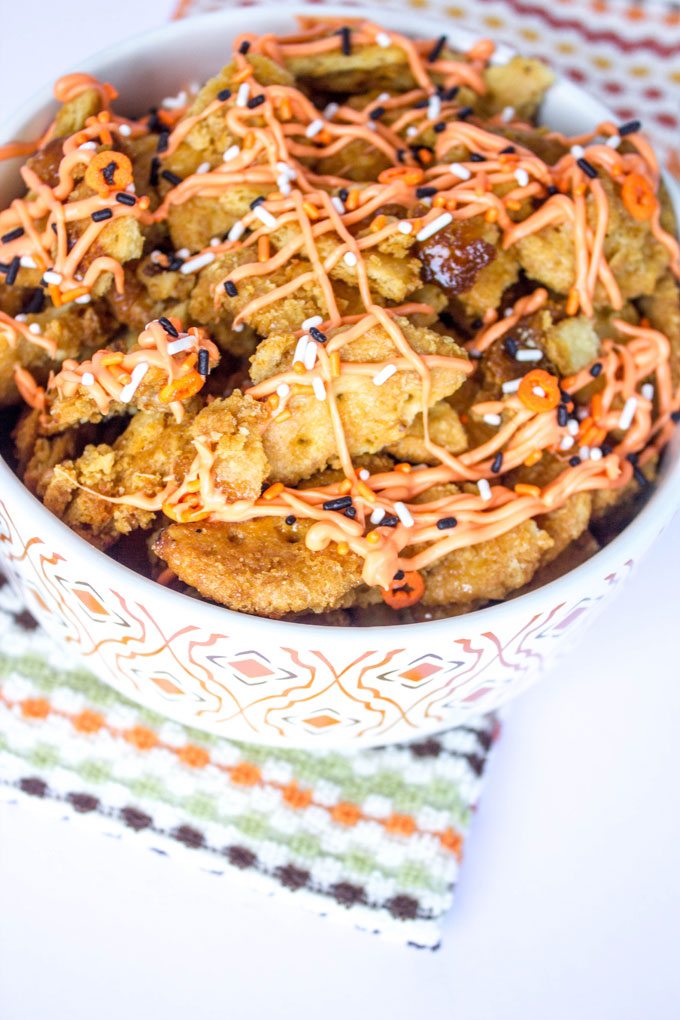 I really didn’t want to change the recipe up too much from it’s original.

Since I was taking it to a Halloween party, I did want to “Halloween-ify” it. Is that a word? No? It’s is now.

I had a whole family size box of Ritz Crackers in my pantry that was 17.8ounces, just shy of the 18 ounces of crackers the recipe called for.

So I used that instead. I also broke up some of the crackers so there would be some smaller pieces as well. 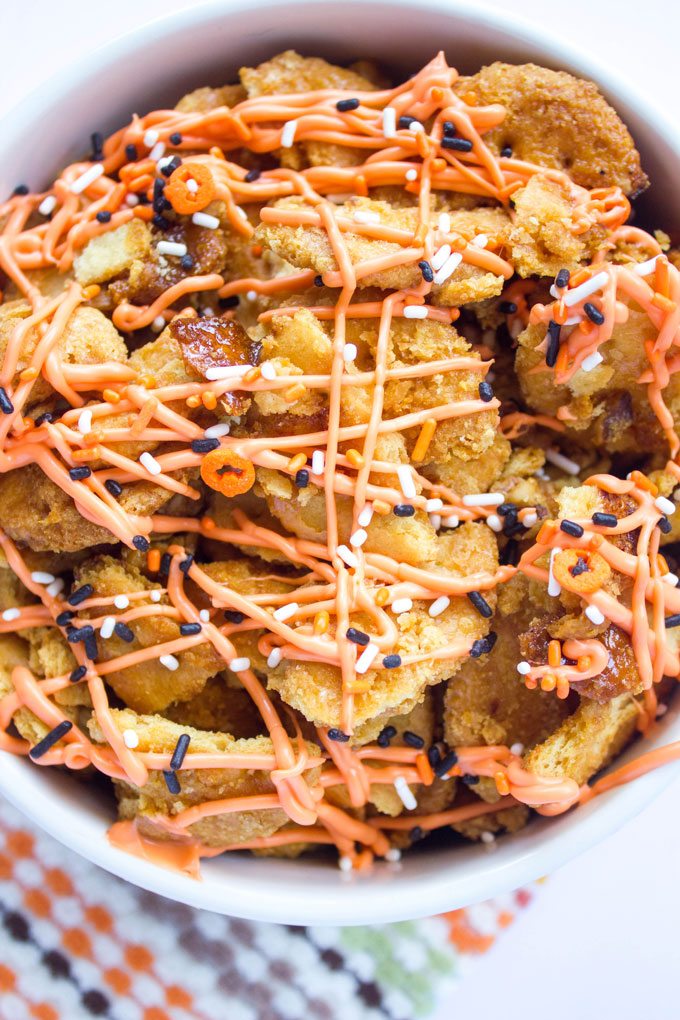 I drizzled some melted Wilton Orange Candy Melts over the top and sprinkled the finished serving bowl with some Halloween sprinkles.

Those two things are NOT necessary for this dish.

As I mentioned, I made this for a party we were going to.  That’s why I decided to make it a little more festive.

Plus our themed reveal day was Fall or Halloween.

I’m  also pretty sure that if you wanted to, you could add a little spice to the final mixture and create different variations of the Caramel Walnut Ritz Cracker Bites.

For instance, Apple Pie Spice or Pumpkin Pie spice added just before pouring the mixture over the crackers. I am seriously considering trying this because I want to see if it works. In the meantime, I am sure you’d just like the recipe for this version of the Caramel Walnut Ritz Cracker Bites. 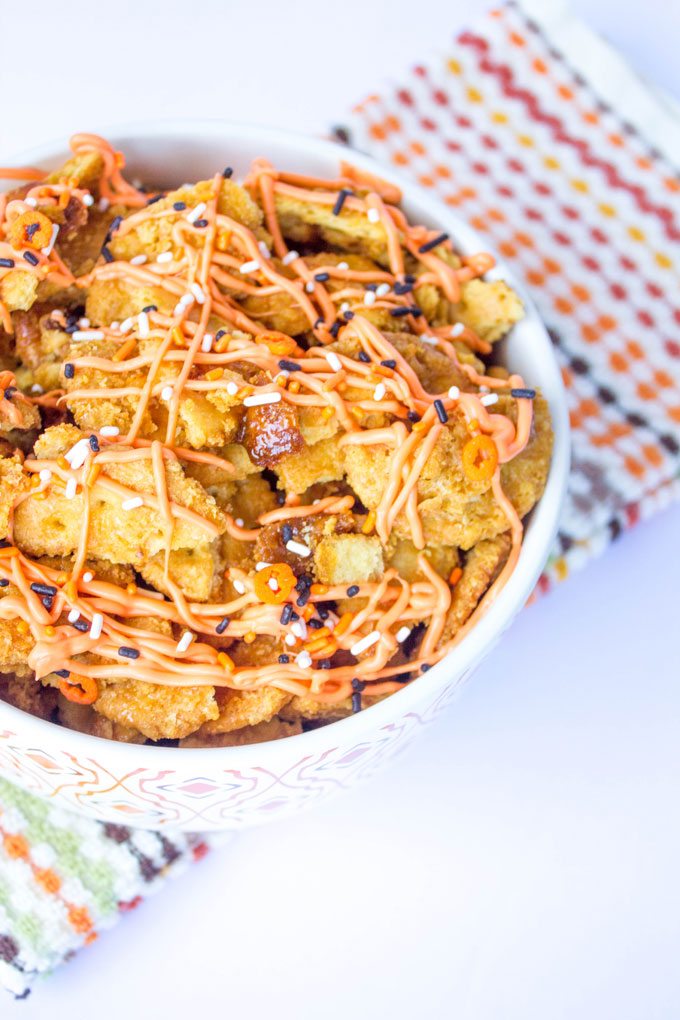 These look so good, I could eat way too many. Great themed reveal choice,

i love how you dressed this up for fall! these ritz bites are great for parties, and i think you could definitely add some spice to them too!

Very interesting snack and it looks so fun the way you've decorated it for Halloween! Nice SRC pick!

This looks so good, and Halloweeny and I think I need to make this, soon.