Fresh Banana Peppers filled with a creamy cheesy spread and rolled into crispy crunchy breadcrumbs. These Baked Banana Pepper Poppers are a quick and easy favorite.

We love spicy here at our house, or rather the majority of us do.

From Cajun Food to Thai food, the spicier the better for me.

When it was announced that we’d doing a “Spice It Up Theme”, it took only a few minutes for me to decide what I wanted to make.

In fact, the “pepper” part of my garden probably takes up about half the garden to be honest.

I didn’t know how well everything would do. We had such a terribly hot and dry summer last year, that I didn’t have high hopes for this year, but we went with it anyway.

What did happen, was that all 10 banana pepper plants are thriving this year. To date, I am pretty sure we have pulled more than 100 banana peppers from our plants and they just keep growing.

All 10 of the plants have at least 3-5 more growing in various stages now. That will be between 30-50 more.

All the other pepper plants are doing really well too, but those banana peppers are just insane.

So far this summer we’ve pickled banana peppers, eaten them on sandwiches, eaten them in salads, put them in dips, cooked them into pasta dishes and so on.

A couple of nights after pulling another 40 of them and adding them to our already growing collection in the fridge, I decided I was either going to have to pickle another batch.

Or I needed to figure out some new ways to use them because there were just too many to eat them in salads and sandwiches and not risk some going bad.

We had a big conversation about how they are pretty interchangeable with jalapenos. Couldn’t we just make jalapeno poppers with them?

Oh yes. And we did. And I am SO glad we did. I have a feeling these will become a big treat around here. We managed to devour the first batch in a matter of minutes (we made 14).

The second batch we doubled the recipe and made 28. It took a little longer to consume them and there was much water drinking and dragon breathing abounding but they were just so freakin’ good! It was one of those things were you could not eat just one. So, so good. A new favorite around here.

Special note: Since we made them the first time, we have made them 4 more times and each time we think we need to make more.

If you are making this for a party or gathering of more than 5 people, I strongly urge you to account for 3-4 halves per person in attendance. They go fast!

Set them aside to dry. Mix up your cheesy mixture.

Slice the tops of each pepper. (just the top end)

If you’re lucky like me, you’ll enlist a kids help. This is my son Ryan. Well, his hand.

And we make so many of them that I needed both of his hands plus one extra kid so we weren’t in the kitchen for 2 hours making these.

Next, slice the banana peppers in half lengthwise.

Try to make as straight a cut as you can to end at the tip.

Next scrape out all the little seeds.

Do this part gently, because the banana peppers are fragile, you can easily split them or tear them.

If you do, they are still usable, you just have to be super careful the rest of the steps.

Once you’ve removed the seeds, it helps to rinse them off in cold water one last time to make sure you’ve got them all gone.

I usually use a lot and just sort of mold the cheese mixture into a long ovalish shape to go in there, but you can do whatever works best for you.

Cover them and refrigerate at least 1 hour.

Once chilled, dip the banana peppers into milk, then flour and set aside to dry about  5 minutes.

Make sure they are covered pretty well with milk and flour. Allow about 5 minutes or so for them to dry.

After 5 minutes, dip them carefully into your beaten eggs.

Try not to squeeze them as hard as my son did. haha Cover them completely in egg.

Transfer them immediately to the bread crumbs and gently coat them.

Whatever. Just get them coated up real well.

Check out the other fantastic Spice It Up Lineup! 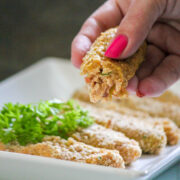 For the Cheese Filling:

Oh man! I could eat a whole plate of these right now! The Mr. and I would LOVE these I'm sure...dragon breath and all. :)

Showed these to DH and he is over the moon! Thanks so much for the wonderful idea.

Oh those banana pepper plants. My parents used to plant them every year in their garden and they are so bountiful. I wish I would have had this recipe to use them with (sadly there is no more garden of theirs). What I like about this recipe, well I like a lot of things about this recipe, but the top 2 are that you use Cheddar cheese and they are baked. Now I just need to find a local source for some of those garden fresh banana peppers to make this oh so good appetizer.

I inherited some pepper plants from a friend who had planted too many seeds this year. But he couldn't remember which ones he gave me. They look a lot like banana peppers so I was going to try and stuff them to see how they taste. To be honest I have never met a pepper I didn't love, hot or not. This looks like a great recipe to use with them.

I've never had a pepper popper! Jalapeno or banana or otherwise! Need to make these and really need to start a garden....