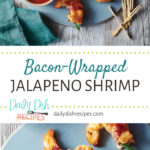 Bacon-Wrapped Jalapeno Shrimp with Cherry Cola BBQ Sauce full of flavor, sitting on the tongue with an exciting contrast of hot and sweet and savory. From the book Valerie’s Home Cooking: More than 100 Delicious Recipes to Share with Friends and Family by Valerie Bertinelli.

I’ve been a huge fan of Valerie Bertinelli since I was a child and watched her on One Day at a Time. Yes, I know… I might be dating myself a little but in fairness, I was a really young child when the show first came out so I primarily saw those seasons in repeats later. Yes I watched her on Touched by an Angel and Hot in Cleveland too.

As a foodie, when I heard Food Network was going to be airing Valerie’s Home Cooking, I got my DVR ready and have only missed a couple of episodes over the years. Valerie cooks like I do. She enjoys food like I do. I feel like I have a kindred spirit in her.

I was pretty excited when I found out she was releasing a cookbook and when I was given the chance to review it, I was chomping at the bit for it to arrive.  When it arrived, I had to set it aside and wait until I had a little time. When that time finally came, I brewed a hot cup of cinnamon tea, curled up under a blanket on a chilly night and cracked opened this big beautiful book. Valerie’s Home Cooking: More than 100 Delicious Recipes to Share with Friends and Family.

What a big beautiful cookbook, with 272 glorious pages and over 100 full color food and home cooking recipes there is something for every palate. Valerie puts her original twist on classics such as Hamburger Helpa, Chicken a la King Crepes, Lobster BLTs (omg they were AMAZING!!), Quick Rotisserie Chicken Gumbo, Slow-Cooker Sloppy Joes, Four-Cheese Crab Mac ‘n’ Cheese (next on my list) and S’mores Popcorn.

And these aren’t complicated recipes. These are recipes that Valerie herself shares with her own friends and family and makes frequently. She has written each step in an easy to read, easy to follow format eliminating the intimidation factor that many would-be home cooks face.

When my eyes finally fell on the Bacon-Wrapped Jalapeno Shrimp with Cherry Cola BBQ Sauce might heart might have skipped a beat. Bacon. Check. Jalapenos. Check. Shrimp. Yes please. I couldn’t wait to try it. Talk about a savory, spicy flavor burst until you get a little of that Cherry Cola BBQ Sauce in there and then you have this tangy, sweet sensation. It’s literally like a dance in your mouth. Incredible!

Ready to make this Bacon-Wrapped Jalapeno Shrimp with Cherry Cola BBQ Sauce too? 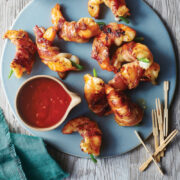 Photos and Recipe printed with permission from Time Inc. Books

It works really well for me