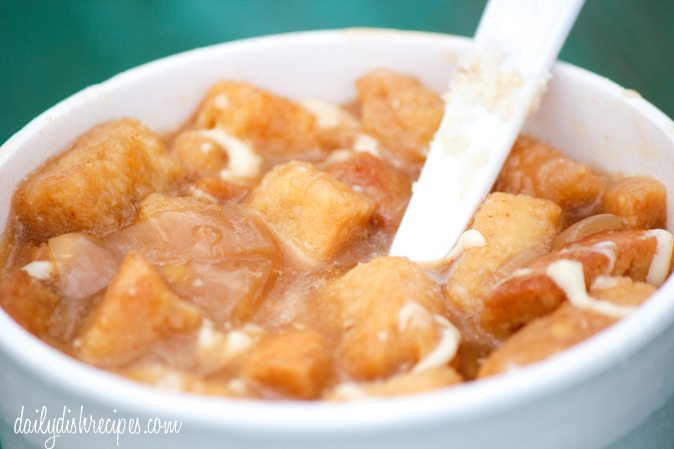 Soups are wonderful this time of year. I love a big bowl when it’s freezing outside, the heartier the better. There is nothing very hearty about French Onion Soup… that is until you add the Homemade Croutons full of flavor and texture and … mmm… goodness.

I have two out of five teenagers that will eat any type of French Onion Soup. I have three out of five teenagers that will eat french onion soup if it has croutons and cheese in it. The other two are just picky and that’s just them. One (the oldest girl) would live on pizza and Ramen if I let her, and the other one is the youngest and still developing a taste for lots of foods. I forgive her. She’s getting better. She’ll try this each time I make it, and each time she eats a bit more of it than the last, so I have faith. The other three will devour it.

I got this recipe out of one of those cookbooks from the 70’s that was put together by a school or junior league or something. I don’t have the cookbook anymore, but I still have the index card I wrote it all down on. I don’t need that to make it because the recipe is just that easy. This is one of the best onion soup recipes I’ve ever had.

Do let me know what you think!

Tell me in the comments: What is your favorite kind of soul-warming soup you love on a cold day?

To Make the Croutons:

To Make the Soup:

To Make the Croutons:

To Make the Soup:

Come take care of me and make me soup. I'm siiiiiick.

I think this would heal me.

I can't believe you are still sick hon. :( I wish I was closer, I'd bring you tons of soup and come just sit with you and fluff your pillows and stuff. Feel better! FASTER!

I tried to grab your button but it doesn't work. Can you check it out for me. I'm a new subscriber and looking forward to sharing recipes and craft projects.

JoAnn, thank you so much for telling me. I don't know why it didn't copy and paste over accurately but it should be all fixed now. Please let me know if you have any further questions or if it doesn't work for you. I appreciate you grabbing it! I'm looking forward to getting to know you better! Your papaya jam sounds amazing over those pancakes!!