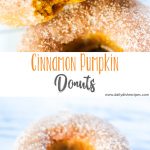 Every bite of these Cinnamon Pumpkin Donuts is like a delicious bite of Fall. Soft, nibbles of goodness filled with so much cinnamon and pumpkin flavor in every bite.

It’s the second to last day of Pumpkin Week and oh my, the recipes shared have been incredible! Over 140+ recipes have been and will be shared collectively this week from 34 bloggers.

#PumpkinWeek hosted by Terri from Love and Confections and Christie from A Kitchen Hoor’s Adventures is one of my favorite events of the year. It’s a reminder that Fall is on it’s way, and I’m totally okay with that. Yesterday I don’t think we topped 70 degrees, and I as I was writing this, it was a gorgeous 62 degrees out. I’m loving it.

Special thanks to ALL of our sponsors this week for providing the prize packages. Don’t forget to enter the giveaway all the way at the bottom of the post.  There are only a couple of days left and there are truly some cool things to be won!

Also, a huge thanks to Dixie Crystals, one of our sponsors for this event. As usual, they were quite generous with their sugar shipment, which enabled me to create all these delicious recipes.

Thank you so much!

I used Dixie Crystals Sugar to make these Cinnamon Pumpkin Donuts and most of the pumpkin recipes I shared this week. 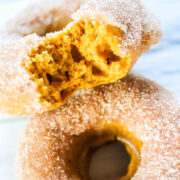 FOR THE CINNAMON PUMPKIN SUGAR MIXTURE: