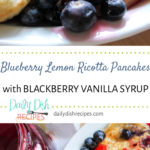 There is nothing that makes me sadder on Secret Recipe Club reveal day, than to learn of a member who was orphaned. It’s not right.

Seriously, how hard is it to pick a recipe and make it. See this one? I did it in less than an hour – that was the choosing, shopping and making. And guess what? It’s actually TWO recipes from the orphaned blog Cooking In Stilettos.  I had her Blueberry Ricotta Pancakes bookmarked to try, so that was an easy pick. Then instead of making the syrup in the recipe, I decided to make her Blackberry Vanilla Syrup because I already had some blackberries and my husband adores Blackberries.

My 18 year old son came home in the middle of making these Blueberry Lemon Ricotta Pancakes and ate a bunch of them himself, and decided that they were AMAZING (they are!) and when he tried some of the Blackberry Vanilla Syrup with them, he kept oohing and ahhing and decided it would be luxurious served over ice cream. Good thing we have some, and I know what he’s having for dessert this evening.

Aly, this was such a fantastic recipe, I couldn’t stop sampling while I was still cooking and my photos aren’t terrific because all I wanted to do was EAT them. haha Thank you so much! (and thanks to whoever orphaned her so I could make these amazing pancakes).

You can get the recipe for the Blackberry Vanilla Syrup here.

And now, the Blueberry Lemon Ricotta Pancakes. Adapted slightly from Cooking in Stilettos. Only change I really made in my was two add the juice from a whole lemon, as well as grating a whole lemon – I had a few to use up, so this seemed like a good enough thing to use them with. Recipe is how I made. Original here. I got 12 pancakes out of the mix, but I made them pretty big. Small pancakes would probably garner about 20.

Awww, it's true - no one should be orphaned! You totally stepped up to the plate and made two amazing items. I looooooove lemon blueberry pancakes and that blackberry vanilla syrup sounds good enough to drink!

Instant pancake mix? Can you tell me how to convert that to flour etc? Hard to find in the UK

Well you could make regular pancakes, and just add the lemon zest, the lemon juice and the blueberries pretty much the same way. Instant pancake mix is just the dry ingredients and you only need to add water. I am not sure how you would exactly duplicate instant pancake mix. There are recipes for homemade "instant" pancake mix. That might work. Do let me know how you get on.

I made pancakes too at this round! Great minds pick alike!

I have been told that my pancakes are "not the best." But I might give these a try. Thanks for sharing with the SRC.