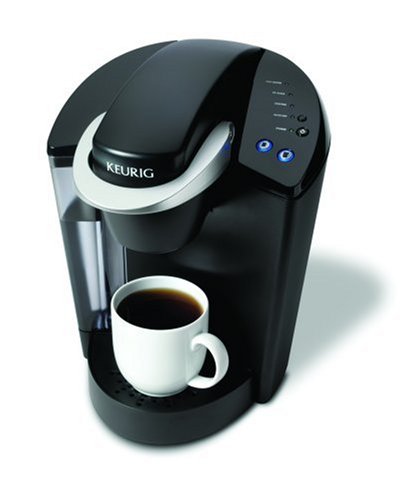 When I first saw the Keurig coffee maker, I thought it was totally not for me – I was in love with my current coffee maker and had no need for a new one. And with as much coffee as I drink in a day it seemed that a single cup coffee maker would not work in my household. It took me months after I first discovered it, to even see one in person and even then, while I was impressed, I still couldn’t see how it would fit into my lifestyle.

A couple of months later, my favorite coffee maker decided to take a break on me. It just died. Not even a year old, over $100 retail and there was no logical reason that it quit working, it just did. The grinder worked on it, but it wouldn’t transfer the water. I tried to make it work but to no avail, and I was annoyed. I knew I would have to do something soon, because using a borrowed coffee pot from your best friend is not the way to make a good pot of coffee.

A few nights later I was at the store with the kids and we were looking at the newer George Foreman grills because I am wanting one for Christmas. We decided to wander into the coffee machine aisle and immediately I feasted my eyes on the Keurig again. The machine truly had me intrigued by its design, shape and concept and it was on clearance for a substantial discount, since they had just come out with a new model. I won’t lie, I bought it on a whim. Even as I set it up when I got home, I started to think – seriously, my frugal mind has gone out the window. Why would this coffee maker work for me?

I loved the large reservoir for the water, I could fill it each morning, and I have yet to need to refill it before the days end, which is nice. When you first turn the machine on, it takes a moment or two to get the heat element hot, so your first cup of the day probably takes about 2 minutes total to brew from start to finish including dropping in the k-cup and filling the water reservoir. After that? Every cup of coffee takes about 30 seconds until you turn the machine off for the day.

As soon as one cup is brewed, provided you don’t turn off the machine, it immediately sucks water out of the reservoir and holds it on the heating element until the next cup, which means that as soon as you are ready for a new cup of coffee, the water is already hot. The brewing takes about 30 seconds to fill your cup and voila! Very cool.

At first, I loved popping the little K-cups in and having a fresh brewed cup of coffee less than 30 seconds later. Actually, I said at first, but I still love that – those little K Cups are ingenious and the flavors are awesome. But after a week, I was out of the starter set of K-cups they give you (a box of 40 that are a mix of coffee, tea and hot chocolate) and it was time to get some new ones. So we headed out to the store to purchase them. I was a bit surprised at the cost for a box of them. Maybe to others that is a great deal, but since I buy my Folgers in bulk, and when I do buy gourmet it is only when it is drastically discounted or I have a coupon, it was alarming. I would be spending over $10 a week on coffee, when right now I spend less than $7 a month on coffee.

Deflated and discouraged, I decided I would stick the Keurig in my garage sale in the Spring with a $20 tag and a note that said “only used 7 times”. I decided to browse the other, less expensive coffee makers that brew an entire pot. I had chosen one, and was ready to spend another $50 on a coffee maker that made more sense, when something caught my eye. 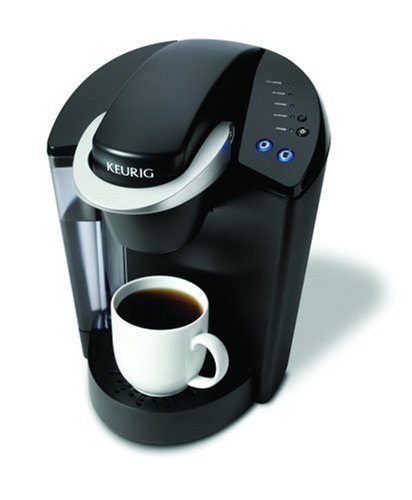 I found this beautiful little piece of equipment. Suddenly I saw my frugal dreams coming true. This little reusable coffee filter fits right inside where the K-Cups go and you can use any ground coffee you want. Awesome.

It has now been about 2 months since I started using the Keurig Single-Cup Home-Brewing System, and honestly I think I am saving more money now than I was on coffee before. Here’s why.

I am used to drinking about a pot of coffee or more a day. When the coffee pot would get low, often I would fill my cup with the last bit of coffee and brew another pot. When that was fresh and hot, I’d throw out what I was drinking and pour myself another cup. One cup wasted. Then, if I got tired of coffee, however much was left in the pot, got wasted too. Now, I make exactly how much coffee I need in a day and I never waste a single cup.

Also, when I would need to get up in the morning and leave immediately, I really only needed one or two cups, there was no real way to do that. I would brew a pot of coffee, pour myself one when I was getting ready, drink that and then grab a travel mug and fill it. All the rest of the coffee in the pot got wasted. That doesn’t happen anymore.

With the additional reusable filter, I can buy any coffee I want. If I want to make it flavored or gourmet, I can do that too. I can add a little bit of spice to the coffee grounds, and when that cup is freshly brewed, I have gourmet coffee. Delicious, hot and fresh.

The only thing I can honestly say that I don’t like about the coffee pot, is that I have to constantly refill the reusable filter. I clean it out between each use and fill it again just to get a cup. It’s a bit annoying, but its not a huge deal. I give the coffee pot FOUR stars. The only reason I am not giving it 5 stars is due to the price of the K-Cups and the suggested retail price of the actual coffee maker. They are a bit high in my opinion, since many of the cheaper models still make delicious coffee. Yes, I recommend it to others, but only if you can justify spending the money on the coffee maker, and are willing to spend the extra $10 on the reusable filter.

Do you have this coffee maker? What do you think?