This week’s #SundaySupper theme is Heritage. I have always joked that I am a bit of a mutt, but really that isn’t true. I was adopted at birth, so my mom and dad are really the mutts. I am not really sure what either of them are. A lot of everything. And my step dad is German. And … hubby is Scottish and well, it’s not like I was out of choices there, so I knew this week would be super easy.

Then I got to thinking about it.

When I was in 7th grade my mother pushed me to take French in school. I didn’t understand it at all. Everyone else was taking Spanish but she insisted I took French. Then when 8th grade rolled around, she insisted I continue with it, and so I did, because by that time I actually loved the language and the culture and was a bit obsessed really. And she always encouraged it.

The funny thing is, I always thought the main reason she was pushing it is because she lived in Canada before I was born and they adopted me. So I really had no clue what the real reason until I was going into my 3rd year of French and one day she she told me.

She said the only thing I know about your biological mother is that they had a French Heritage. She wouldn’t say anything else, and I don’t think I asked much more. I think I was sort of stunned.

All these years later, I know what my biological families last name is. And it is indeed 100% French. There were a few that immigrated over to Germany and multiplied that way, but the name is and was originally 100% French.

I will always love that side of my momma. That side that didn’t want to admit to the fact that I was 100% hers, but yet she still gave me that gift of my past which is a beautiful thing. I did complete 5 full years of French.  I wish I could tell you that means something, like I can speak it fluently, but alas, I cannot. Unfortunately time has made me forget a lot. I can translate better than I can speak it. I can tell you what thousands of words are and a lot of it is coming back as my teens are taking French in school, which as been really awesome.

So of course, for Heritage week and #SundaySupper, I chose a French meal, and I really chose the most popular French meal. It’s a favorite of mine and my kids, and we’re sharing it with you. Enjoy! 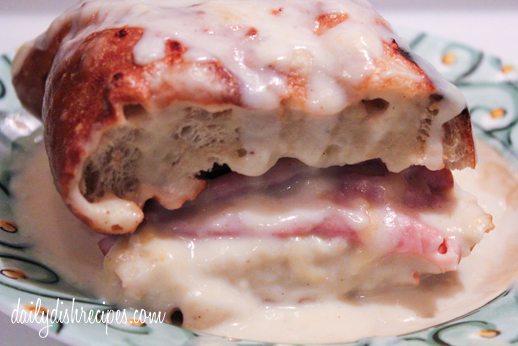 Ready to get hungry? Don’t forget to visit the other great Heritage #SundaySupper recipes:

I completely enjoyed reading your story. However it came about that you took 5 years of French lessons...lucky you! Especially knowing now that it's part of your family history. I wish I knew how to speak French. Maybe someday I'll learn. LOL! I've also always wanted to make a croque monsieur (or madame) but never have. Your sandwich looks indrecible!!! I think you've inspired me to give it a try. Mercie! :)

This is such a decadent dish! I had it first at Pastis in NY and fell in love..its a once a year thing and is just so lovely.

Oh my heavens! Oh. My. HEAVENS!!!! I am instantly in love with this recipe. Seriously. I can't wait to make it, thank you so much for sharing it for #SundaySupper, and what a beautiful story to go with it.

Such a beautiful story, and thank you for sharing it with us. Your parents sound like very special people.

The sandwich is heavenly. One of my favorite dishes to eat in Paris! Cheers!

What an amazing story you have, my friend. And what a great way to celebrate a part of yourself. These look amazing!